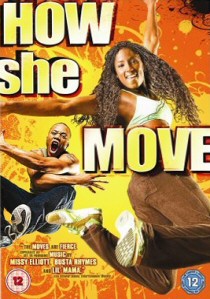 An energetic, gritty and inspiring story about a talented young woman who defies the rules to achieve her dreams, How She Move debuts on DVD from 4th August 2008, from Paramount Home Entertainment. Nominated for the Grand Jury Prize at the 2007 Sundance Film Festival, the film wowed audiences with its unflinching portrayal of life in a crime-infested neighbourhood and explosive sequences celebrating the unique urban art form of step dancing.

Directed by Ian Iqbal Rashid (Touch of Pink) and featuring a hot urban soundtrack with songs by Missy Elliot, Busta Rhymes and Lil' Mama, How She Move is the gritty story of Raya Green's (Rutina Wesley) battle to escape her drug and crime-filled neighbourhood. After being accepted into the exclusive Seaton Academy, Raya's family hopes she will finally fulfill her full potential. Just as Raya begins to settle into her new life, things take a turn for the worse when her sister suddenly dies of an overdose, shattering her family life and forcing her to return to her home town.

Feeling trapped and looking for a way out, Raya sees her chance to escape through a local step contest offering a $50,000 prize. Persistence and passion prevail as she battles her way into an all-male team led by the reigning champ of the local steppin' scene, Bishop (Dwain Murphy). Sparks fly between Raya and Bishop and she finds herself in a battle between her loyalty, her determination, her family's ambitions and her heart.

HotDVDBD
From the producers of Nobody and John Wick comes a bare-knuckle, coal-dark holiday action-comedy that says you should always bet on red as Violent Night sledges in on DVD and Blu-ray 6th March 2023 from Warner Home Video. END_OF_DOCUMENT_TOKEN_TO_BE_REPLACED
Top PicksView