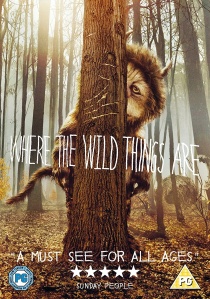 Escape to a land of fantasy when Where the Wild Things Are arrives on Blu-ray Multi-Pack, DVD and digitally on 10th May 2010 from Warner Home Video. Based on the highly awarded, critically acclaimed children's book, innovative director, Spike Jonze, invites you to release your inner child and experience this classic story about childhood and the places we go to figure out the world we live in.

Where the Wild Things Are follows Max, an adventurous boy who feels misunderstood at home, as he escapes to where the Wild Things are. Max lands on an island where he meets mysterious and strange creatures whose emotions are as wild and unpredictable as their actions and who are desperately longing for a leader to guide them, just as Max longs for a kingdom to rule.

Where the Wild Things Are will be available on Blu-ray Multi-Play Pack and Single Disc DVD. The Multi-Play Pack includes a Blu-ray copy, a DVD and a Digital Copy of the movie. It will also be available via Electronic Download and ON DEMAND through Digital & Satellite TV Providers, game consoles such as Xbox 360 and PlayStation 3 in addition to rental outlets.

Nine-year-old Max runs away from home and sails across the sea to become king of a wondrous realm of gigantic fuzzy monsters - but being king may not be as carefree as it looks! Filmmaker Spike Jonze directs a magical, visually astonishing film version of Maurice Sendak's celebrated classic exploring the joyous and wild rumpus of the time and place we call childhood.

DVD
When the world is locked down, they'll find their ticket out in Locked Down, released on DVD 7th June 2021 from Warner Home Video. END_OF_DOCUMENT_TOKEN_TO_BE_REPLACED
Top PicksView