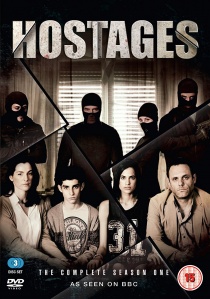 Arrow Films is pleased to announce the 16th March 2015 DVD box set release of the complete season one of the nail-biting and gripping, Israeli psychological thriller Hostages.

Filmed on location in modern-day Jerusalem, the series currently airs on BBC Four at 9pm on Saturday evenings - the same coveted prime time slot that played host to The Killing, Borgen, The Bridge, and Prisoners of War.

The 10-part Israeli series is an intense, modern-day psychological crime-thriller that will leave viewers on the edge of their seat. A brilliant female surgeon, Dr. Yael Danon (played by Ayelet Zurer), discovers her family have been kidnapped the night before she is due to perform surgery on the Israeli Prime Minister. The hostage-holders have one demand: "Kill the PM on the operating table or her loved ones die."

The tension lies in the contrast of two universally relatable themes - the choice between a very personal dilemma faced by everyday characters, and a greater moral issue of a wide-scale social and national conspiracy - which ultimately makes for addictive viewing.

The original Israeli series of Hostages was a massive hit in its native Israel, and follows the US adaptation that was shown on Channel 4 in 2014, starring Toni Collette and Dylan McDermott.

As we follow one woman's battle to save both her family and the Prime Minister, we are taken on a thrilling and unexpected emotional journey where the key characters fight for survival and nothing is what it seems.

As the series builds to its climax, we gradually discover that each character is much more complex than we originally imagined. As we learn about the better sides of the criminals, we also unravel the dark truths behind what seemed to be the perfect Israeli family.

Slowly but surely special bonds start to form between family members and kidnappers, creating a new fabric of relationships. By the end of the first season the lines of distinction between right and wrong, and good and bad, have been completely blurred.

When events reach a surprising climax for the season finale, the characters and the viewers will finally realise that everything that has happened has all just been the tip of the iceberg.

The original Israeli series was produced by Chaim Sharir and written by Omri Givon and Rotem Shamir. It is distributed internationally by Armoza Formats.