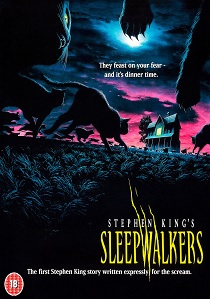 Stephen King's Sleepwalkers is a classic horror story that takes a perfect Normal Rockwell town... and turns it inside out.

Brian Krause, Mädchen Amick (Twin Peaks), and Alice Krige (Chariots of Fire) star in this terrifying tale of modern-day vampires who move from small town to small town to prey on virtuous young women. Imperceptibly inhuman to everyone except for felines, these vicious shapeshifters have their eyes on a new victim: Tanya (Amick), who has fallen for Charles, the new boy at her school.

Making its debut on Blu-ray in the UK, released on 26th October 2020, Eureka Classics is proud to present Stephen King's Sleepwalkers.

BD
Say the \'B\' word three times and have a wonderful Day-O as Tim Burton\'s Beetlejuice arrives for the first time on 4K UHD 31st August 2020 from Warner Home Video. END_OF_DOCUMENT_TOKEN_TO_BE_REPLACED
Hot PicksView