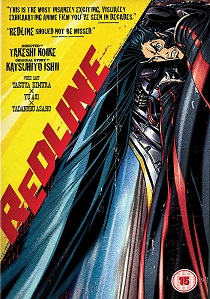 The crazy inventiveness and fun of Hanna-Barbera's Wacky Races meets the kinetic thrills-and-spills dynamism of the Podraces from Star Wars: Episode I - The Phantom Menace in Redline a stylishly animated sci-fi feature set against the backdrop of futuristic interplanetary auto racing which is released on DVD, Blu-ray and as a Blu-ray/DVD Combi Pack by Manga Entertainment on 14th November 2011.

Written by Katsuhito Ishii (writer-director of the cult comic book to movie adaptation Shark Skin Man And Peach Hip Girl), seven years in development and utilizing over 100,000 hand-made drawings, the directorial feature of Takeshi Koike (The Animatrix) has been hailed as "truly out of this world" (Twitch) and "an incredibly exciting cinematic experience" (UK Anime Network).

Following his dream to become one of the hottest racers in the universe, daredevil driver "Sweet" JP has attracted a loyal band of followers thanks to his cool retro-fashion style, his hyper-customized vehicle and his habit of frequently ending his races with a spectacular crash. What very few people know about JP is he is deep in the pocket of the mob and is often paid to lose races. Following his latest escapade, during which his engine explodes and his car is virtually written off, JP is ready to throw in the towel on auto racing.

That is until he discovers has inadvertently qualified for the prestigious no-rules, anything is allowed Redline race after two other drivers have pulled out - and for very good reason. The race is scheduled to take place on the military planet of Roboworld and its government has threatened to kill all the participants. Despite the danger, JP decides to go ahead and take his shot risking everything in his pursuit of the ultimate auto racing title.

DVD
You ever hear the one about the cop, the blonde, the psycho and the mafia princess? Birds Of Prey And the Fantabulous Emancipation of One Harley Quinn, coming to DVD, Blu-ray and 4K UHD 20th June 2020 ... END_OF_DOCUMENT_TOKEN_TO_BE_REPLACED
Hot PicksView