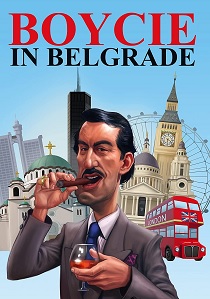 NewsTV SeriesSpecial Interest
News Article Go back to homepage
Join John Challis on his journey to Belgrade, Serbia, where he aims to uncover why 'Only Fools and Horses' is so popular in the country as Boycie In Belgrade arrives on DVD 14th June 2021 from Ignition.
John Challis
Lazar Vukovic
Lazar Vukovic
Ignition
1 hour 20 minutes
14/06/2021
#BoycieInBelgrade
Thank you for supporting DVD365.net when you order using the link(s) below. As an Amazon Associate we earn from qualifying purchases
Buy DVD
Buy DIGITAL
Information

Pack your bags Marlene we're only off to Belgrade... When Only Fools and Horses' very own wheeler car dealer Boycie aka John Challis learns that the classic British sitcom is massive in Serbia, he puts on his Burton suit and takes a trip to Belgrade to find out why, in bonkers documentary travelogue Boycie In Belgrade, which gets its UK premiere 14th June 2021 from Ignition.

One half of the show's favourite 'classy' couple that saw Boycie married to forthright Marlene - played by Sue Holderness, who recently returned to the small screen in another London fave Eastenders, the brilliant John Challis (Dr. Who, Coronation Street) takes a jovial journey to Belgrade to investigate the popularity of one of Britain's best loved sitcoms.

He takes us on a tour of the city, as he looks to uncover why Only Fools and Horses is so popular in Serbia. From a royal palace, to a brandy distillery, via the obligatory car dealership, and even a turn in a Serbian TV sitcom, he gets the cushty red carpet treatment from admirers and fanatics alike.

This entertaining road-trip with sitcom favourite is a must watch for any fan of Only Fools and Horses, you'd be a plonker to miss it.

The film is produced and directed by British-Serb Lazar Vukovic, whose chance encounter with John Challis put the wheels in motion for what would become Boycie In Belgrade and with this match made in Peckham, this time next year they could be millionaires.

BD
Finding praise from critics around the world, Boyhood, following the life of Mason, from early childhood to his arrival at college, is released on Blu-ray and 4K UHD 27th March 2023 from Arrow Films. END_OF_DOCUMENT_TOKEN_TO_BE_REPLACED
Top PicksView