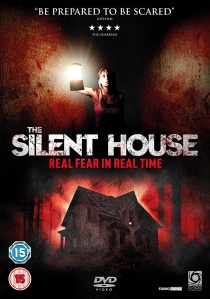 Directed by Gustavo Hernández and based on a true, the horror is quite literally nonstop as ground-breaking chiller The Silent House is released on DVD and Blu-ray on 1st August 2011, courtesy of Optimum Home Entertainment.

Audaciously filmed as one continuous tracking shot, The Silent House is at once a love letter to cult horrors from the annals of cinema history and a daring experiment that delivers its scares in a truly unique way.

The story follows Laura and her father as they begin work on renovating a sleepy country cottage that is due to be sold off by its owner. Everything seems to be going smoothly until Laura hears a sound from upstairs that gradually gets louder and louder. Her father goes up to see what is going on while she remains downstairs on her own waiting for him to return - and the true horror of the situation become painfully clear...

Directed by Gustavo Hernández and based on a true story that is alleged to have happened in a small village in Uruguay in the 1940s, The Silent House is a remarkably refreshing journey into terror and unlike anything horror fans will have encountered before - so much so that it's already been snapped up by Hollywood for a remake.

DVD
One of the most compelling and conflicted characters in Sony Pictures Universe of Marvel Characters comes to the big screen as Jared Leto transforms into the antihero Michael Morbius as Morbius is released on 4K Ultra HD, Blu ... END_OF_DOCUMENT_TOKEN_TO_BE_REPLACED
Top PicksView