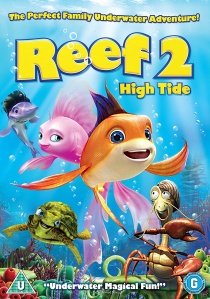 Reef 2, an underwater adventure sure to entertain the whole shoal, is released on DVD, Digital and On Demand on 17th February 2014 from Paramount Home Entertainment.

This sequel to the hit 2006 film heralds the return of courageous little fish 'Pi' who once again has to save his beloved reef. Troy, the nasty shark that Pi saw off in his last adventure has returned, and this time he has brought along his toothy shark friends for a 'fish buffet'!

Pi now has his family - Cordelia (voiced by Busy Philips; Dawson's Creek, I Don't Know How She Does It) and son Junior - and to protect his loved ones, he decides to train his underwater friends in the martial art of 'fish-fu'! Things don't quite work out as planned, however, when new arrival Ronny turns out to be a spy, Cordelia is fish-napped and it's down to Pi and Junior to rescue her...

Dive into a magical new world with Pi, Cordelia and Junior this February with Reef 2, on DVD, Digital and On Demand.

HotDVDBDUHD
From the acclaimed director of fan-favourites such as Baby Driver, Shaun of the Dead and The World's End comes the tribute to 1960s London in Last Night In Soho, available to own on DVD, Blu-ray and 4K UHD 31st January 2022 from Universal Pictures (UK). END_OF_DOCUMENT_TOKEN_TO_BE_REPLACED
Top PicksView