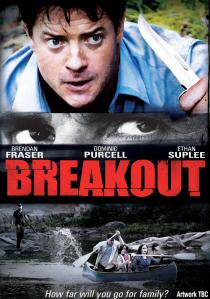 The hunters become the hunted in the action-packed new thriller Breakout, available on DVD 14th October 2013 from Sony Pictures Home Entertainment. After battling ancient mummies in Egypt and dinosaurs at the centre of the Earth, action star Brendan Fraser takes on his most intense leading man role yet in this taut tale of a father who will stop at nothing to rescue his children from two criminals hiding out in the untamed American wilderness.

An innocent camping trip takes a dark turn for a young brother and sister when they witness a murder. The young siblings become the killers' next target as they are chased and hunted through the wilderness. Serving time over a protest gone terribly wrong, their father, Jack Damson (Fraser), devises a plan to break out of prison and rescue his kids from the pair of criminals, Tommy (Purcell) and Kenny (Suplee). A fight for survival ensues in the action-packed thriller where the hunters become the hunted.

HotDVDBDDIGITAL
With stunning revelations, glamorous journeys, and the arrival of the Jazz Age, Downton Abbey: A New Era, released on DVD and Blu-ray 15th August 2022 from Warner Home Video, will be the Crawleys' biggest adventure yet as they grapple with their future and new intrigue about ... END_OF_DOCUMENT_TOKEN_TO_BE_REPLACED
Top PicksView