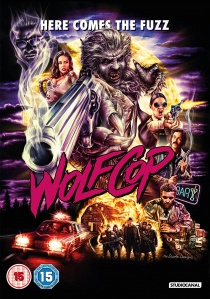 Wolfcop, released on DVD and Blu-ray on 13th October 2014 courtesy of StudioCanal, is a cult classic in the making with its monstrous hybrid of gory prosthetics and '80s b-movie magic. Littered with glorious old school prosthetics, eye-wateringly painful werewolf transformation scenes and the cheesiest sex scene you're ever likely to see, Wolfcop is for fans of modern horror-comedy gems such as Hobo With A Shotgun and James Gunn's Slither.

It's not unusual for alcoholic cop Lou Garou to black out and wake up in unfamiliar surroundings, but lately things have taken a strange turn. Crime scenes seem oddly familiar. Lou's senses are heightened, and when the full moon is out, he's a rage-fueled werewolf. Wolfcop is one cop's quest to become a better man... One transformation at a time.

DVD
Catherine finally takes the Russian throne for her own - but if she thought coup-ing her husband was difficult, it's nothing compared to the realities of liberating a country that doesn't want to be in The Great: Season Two, ... END_OF_DOCUMENT_TOKEN_TO_BE_REPLACED
Top PicksView