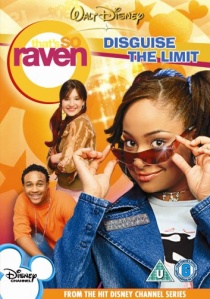 NewsTV SeriesComedyFamilyAdventure
News Article Go back to homepage
The hip teen queen Raven is back, as you have never seen her before, for more hilarious supernatural summer adventures in Disguise the Limit on Disney DVD from 2nd July 2007.
Anneliese van der Pol, Raven-Symoné, Orlando Brown
Rondell Sheridan
Unknown
Unknown
02/07/2007
Thank you for supporting DVD365.net when you order using the link(s) below. As an Amazon Associate we earn from qualifying purchases
Buy DVD
Information

The hip teen queen Raven is back, as you have never seen her before, for more hilarious supernatural summer adventures in Disguise the Limit on Disney DVD from 2nd July 2007. The Disney Channel's number one show in 2006, That's So Raven, which stars Raven Symoné (The Cosby Show) in the title role, is also the second most popular kids live action show in the UK.

Disguise the Limit features four great episodes, including one never-before-seen on television that sees Raven playing for laughs in a variety of disguises and impersonations as she faces the trials and tribulations of being a teenager together with the added problem of being psychic!

Raven Baxter has a special gift for seeing glimpses of the future. However as the glimpses she sees are so brief, she is never really quite sure what they mean, causing all sorts of frequently funny mishaps for Raven, her family and her two best friends Eddie and Chelsea!

In Disguise the Limit Raven appears as several different characters including in one episode, an elderly aunt, a boy and a baby! The exclusive bonus features include a featurette Master of Disguise that reveals exactly how the many faces of Raven were created. Whilst Raven herself takes you on a guided tour through her own favourite moments from the show.

Filled with fun, friendship and a funky soundtrack, Disguise the Limit is top viewing for Tween girls everywhere on Disney DVD this summer.

In these four great episodes Raven finds herself plastered in clay and feathers to pose as a "statue" when she accidentally breaks the statue that Chelsea made of her for an art contest. Next Raven transforms a family feud into family fun when she pays a visit to her country cousins where she transforms herself into Auntie Faye, Delroy, and Baby G. Finally, in a brand new episode, Raven is horrified to have a vision that the Chill Grill is in trouble so cooks up a scheme to serve up some hot tunes and save the business.

DVD
Doctor Strange teams up with a mysterious teenage girl from his dreams who can travel across multiverses in Doctor Strange in the Multiverse of Madness, released on DVD, Blu-ray and 4K UHD 18th July 2022 from ... END_OF_DOCUMENT_TOKEN_TO_BE_REPLACED
Top PicksView