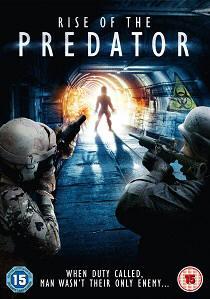 When an elite team of private military operatives receive a lucrative contract for a new mission, they think it will be a simple in-and-out operation. They were wrong. Starring Eric Roberts, Rise of the Predator is released on DVD on 17th March 2014, courtesy of Kaleidoscope Home Entertainment.

A wealthy and powerful venture capitalist (Eric Roberts) has called in the 'Blackjacks' to retrieve his top scientist from a secret energy research facility. To make matters worse, not only has he lost all contact with the labs, his highly-valued scientist holds the key to an unprecedented alternate fuel source.

Unique to this mission, the team are assigned a female psychic operative, Lisa Westbrook (Kristina Anapau), to help locate the target deep within the maze of the underground complex.

Upon arrival, however, the team is ambushed by a blood-thirsty, extra-dimensional creature that has brutally mutilated the on-site security and staff. With their advanced tactical training rendered all but useless, the 'Blackjacks' are forced to rely on their psychic guide and utilize a new brand of cognitive warfare if there is any chance of making it out alive.

BD
Fast forward to the 1980s as Wonder Woman's next big screen adventure finds her facing a wide array of foes including Max Lord and The Cheetah as Wonder Woman 1984 flies in on Blu-ray and 4K UHD 22nd ... END_OF_DOCUMENT_TOKEN_TO_BE_REPLACED
Hot PicksView