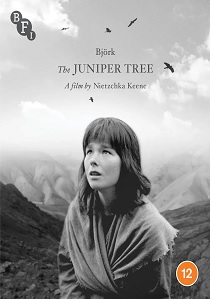 An unsung talent in her lifetime, director, professor and Fulbright scholar Nietzchka Keene's stark, stunning debut feature The Juniper Tree is loosely based on a Brothers Grimm fairy tale of the same name, and stars Björk in her first feature film performance.

Photographed entirely on location in the stunning landscapes of Iceland in spectacular black-and-white by Randy Sellars, The Juniper Tree is a deeply atmospheric film, evocative of Carl Theodor Dreyer's Day of Wrath and Ingmar Bergman's The Virgin Spring, and filled with indelible waking dream sequences (courtesy of legendary experimental filmmaker Pat O'Neill).

A potent allegory for misogyny and its attendant tragedies, The Juniper Tree, released on Blu-ray 23rd January 2023 from BFI, is a major rediscovery for art house audiences.