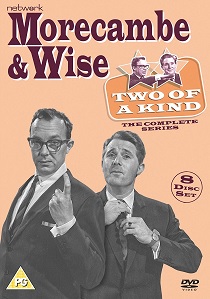 Morecambe and Wise, undoubtedly the best-loved double act that Britain has ever produced, first achieved their phenomenal television success in the early 1960s with this long-running hit series for ATV. Showcasing their mildly anarchic humour, impeccable sense of timing and keen eye for the absurd in a feast of uproarious sketches, on-stage antics and musical entertainment, Two Of A Kind propelled Morecambe and Wise towards superstardom in no uncertain terms.

Each show features fast-moving skits and musical parodies, with Eric and Ernie giving us their inimitable versions of television favourites Supercar, Face to Face and Candid Camera - in addition to memorable interpretations of key scenes from Macbeth and Hamlet, Eric's ongoing battle to get his lines right in Samson and Delilah, and undoubtedly the most ambitious attempt ever seen to recreate the 'fight sequence' in Seven Brides for Seven Brothers! Among the many guest stars are Roy Castle, Joe Brown, Kathy Kirby, Susan Maughan, The Bachelors and Acker Bilk.

Released on DVD on 5th December 2016 from Network, this eight disc set contains all 48 editions of Two Of A Kind (aka The Morecambe And Wise Show) alongside a wealth of special features: including an exceptionally rare early performance from 1957; several appearances on Val Parnell's Saturday Spectacular and the two surviving editions of Piccadilly Palace.

UHD
Doctor Strange teams up with a mysterious teenage girl from his dreams who can travel across multiverses in Doctor Strange in the Multiverse of Madness, released on DVD, Blu-ray and 4K UHD 18th July 2022 from ... END_OF_DOCUMENT_TOKEN_TO_BE_REPLACED
Top PicksView