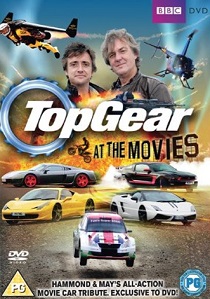 News
News Article Go back to homepage
In this year's Top Gear DVD special, Richard Hammond and James May celebrate cars on the big screen via a blend of action, amazing driving and exotic metal. Top Gear at the Movies will be blasting onto DVD and Blu-Ray on 14th November 2011 from 2entertain.
James May, Richard Hammond
Phil Churchward
Oisin Tymon, Elena Christodoulou
2entertain
Unknown
14/11/2011
As an Amazon Associate we earn from qualifying purchases
Buy DVD
Buy BD
Information

In this year's Top Gear DVD special, Richard Hammond and James May celebrate cars on the big screen via a blend of action, amazing driving and exotic metal. Top Gear at the Movies will be blasting onto DVD and Blu-Ray on 14th November 2011 from 2entertain.

Cars are the bedrock of the most memorable moments in cinema history, be it the action sequences of Bond, Bourne and Bullitt, or the iconic road trips of Thelma and Louise and Smokey and the Bandit. Be prepared for a thrilling selection of races, stunts and awesome feats as Richard and James fire themselves up for their very own Hollywood blockbuster.

The movie themed mayhem includes Richard racing against the world's first jet powered man - Yves Rossy . For the gripping opener, inspired by Gene Hackman's train chase in French Connection, can Richard's Skoda Fabia S2000 Rally car beat Yves around the challenging Sweet Lamb circuit in Wales? Or will the Jet man, powered by four engines with only his body-weight to steer him, come out on top?

Next, using the music-free soundtrack to the iconic car chase in Steve McQueen's Bullitt as their inspiration, Richard and James attempt to find the car with the best engine sound. On a high octane casting couch they search for the ultimate 'goodie' car and the best 'baddie' car auditioning amongst others: an Aston Martin V12 Vantage, Eagle Speedster, Porsche GT3 RS and a Lamborghini Gallardo LP570-4 Spyder Performante, With engine sounds agreed the boys delve into the world of movie car gadgetry. With James Bond's Q as their lead, Richard and James take a Range Rover and attempt to make it bullet-proof, weaponised and even...invisible. Can the Budget Bond car survive a firing squad, deploy an ejector seat and fire weapons to evade baddies?

Lastly, two of the best handling cars on the road - the BMW 1M and the Porsche Cayman R go head to head in a bid to see which can best evade the bad guys in a Bourne Identity styled chase. With an array of villainous vehicles in pursuit, including a 15-tonne tank, a fleet of Motocross bikes, a helicopter and a military grade Wildcat - all armed to the gunnels - Richard finds out which car has the right stuff to win. And you can find out too in Top Gear at the Movies, an absolute must-have for all Top Gear fans and the perfect Christmas gift for cinema-loving petrol heads.

DVD
A teenage murder witness finds himself pursued by twin assassins in the Montana wilderness with a survival expert tasked with protecting him as Those Who Wish Me Dead arrives on DVD and Blu-ray 30th ... END_OF_DOCUMENT_TOKEN_TO_BE_REPLACED
Top PicksView