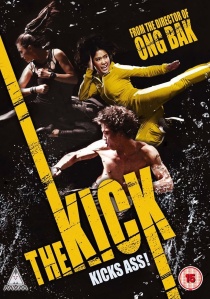 Acclaimed martial arts director Prachya Pinkaew (Ong-Bak, Chocolate) returns with The Kick, released on DVD by MVM on 7th October 2013, a hilarious and compelling new action comedy that dazzles with its wealth of martial arts talent.

Combining breath-taking stunt sequences with perfect comedic timing, The Kick pits a misfit family against a gang of ruthless criminals, in a heartwarming, yet action-packed story that highlights strength, acceptance and revenge!

When a valuable and spiritual artifact is returned to the Thai National Museum it generates interest from a ruthless underworld gang. When the gang's attempt to steal the coveted "Kris of Kings" is thwarted by the curious Tae Yang (Tae-joo Na) and his family, the gang vows to take revenge on those who dared to stand in their way.

The Kick is the funniest martial arts action comedy you'll see in 2013, combining stunts and humour in a style reminiscent of Jackie Chan's best movies. Bringing together a cast of established action stars including Chocolate's Jeeja Yamin, The Kick delivers a varied set of fighting styles that fans of action will love. We adore the comedic nature of the film, which takes the mantle of Kung Fu Hustle, placing the characters in the most unlikely positions whilst incorporating top of the range martial arts talents.