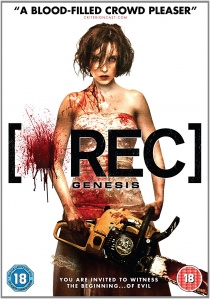 Directed by Paco Plaza (REC 1 and 2; Romasanta: The Werewolf Hunt) and starring Letitia Dolera (Man Push Cart; The Other Side Of The Bed), Diego Martin (I Want You), Claire Baschet (Delicacy) and Ismael Martinez (Carmen; Talk To Her), one of the highlights of this year's Film4 Frightfest in London, the long-awaited and highly anticipated third instalment of the planned four-part saga of [REC] will arrive on DVD and Blu-Ray from Entertainment One on 3rd September 2012.

As the families and friends of Koldo and Clara gather outside the church in the bright Spanish sunshine just prior to the happy couple's wedding, it seems that nothing could possibly cast a shadow on such a beautiful and joyous occasion. But when some of the guests start behaving oddly during the reception, it becomes apparent that all is not well. In no time at all, the party descends into a hellish scene of utter carnage as partygoers begin feeding on each other with a crazed bloodlust.

Amidst the ensuing chaos, Koldo and Clara become separated as those still in control of their human minds and bodies seek whatever refuge they can find. Although apart, the newlyweds know deep in their hearts that each is still alive and set out on a desperate search for each other not fully realising that what should have been the happiest day of their lives could prove to be their last.

DVD
Two lifelong friends find themselves at an impasse when one abruptly ends their relationship, with alarming consequences for both of them in The Banshees Of Inisherin, released on DVD and Blu-ray 30th January 2023 from Walt ... END_OF_DOCUMENT_TOKEN_TO_BE_REPLACED
Top PicksView