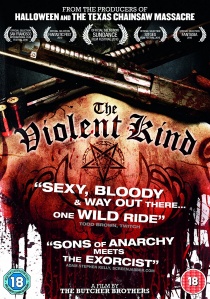 NewsScience FictionHorrorDrama
News Article Go back to homepage
One night at a secluded farmhouse deep in the Northern California woods, a small group of hardened young bikers and their girlfriends are tormented when one of the girls becomes savagely possessed. From the producers of Halloween and the Texas Chainsaw Massacre, The Violent Kind is released on DVD on 25th July 2011 from Metrodome.
Nick Tagas, Tiffany Shepis, Christina McDowell, Bret Roberts, Taylor Cole, Cory Knauf
Phil Flores, Mitchell Altieri
Andy Gould, Michael Ferris Gibson, Jeffrey Allard, Malek Akkad
Metrodome Group
1 hour 25 minutes
25/07/2011
Thank you for supporting DVD365.net when you order using the link(s) below. As an Amazon Associate we earn from qualifying purchases
Buy DVD
Information

From the producers of Halloween and the Texas Chainsaw Massacre, The Violent Kind is released on DVD on 25th July 2011 from Metrodome.

Troubled Cody, a second-generation member of a violent and notorious Nor-Cal biker gang, rides out with his friends to a party deep within the redwood forest. At the end of the wild evening, Cody's ex-girlfriend Michelle is discovered wandering aimlessly, covered in blood, screaming and convulsing as if possessed by something unworldly.

Desperately trying to summon help, Cody's plans are ruined by the arrival of another malicious gang, seemingly from the 1950's, who show up "looking for a few kicks... the violent kind". However, this ominous Rockabilly gang are not there to pick a fight. They want what's growing inside of Michelle - something evil and powerful - and they will stop at nothing to get it.

The Violent Kind mixes the savage artistry of horror, science-fiction and drama to tell a story that will leave you shocked, bemused and exhilarated well after the credits roll.