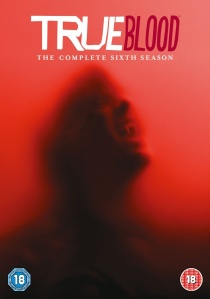 HBO Home Entertainment releases True Blood: The Complete Sixth Season on Blu-ray and DVD on 2nd June 2014 kick-starting the farewell year for the show. This thrilling, penultimate season is packed with even more shocking, scary and sexy moments than ever before. The full sixth season and episodes are also available to own and watch instantly on Amazon Instant Video, blinkbox, Google Play and iTunes.

The season opens with the Authority in flames and TruBlood in short supply. As Bill comes to terms with his newfound powers after emerging reincarnated from a pool of blood, humans are in open conflict with vampires like never before. Meanwhile, Sookie (Anna Paquin; X-Men) and Jason (Ryan Kwanten; Home and Away) must steel themselves for an encounter with their parents' killer: the mysterious and ancient Warlow.

Newcomers are welcomed to Louisiana - some human, some not so human. Governor Truman Burrell (Arliss Howard; Jurassic Park, Moneyball) is a politician who after some time of being extremely patient is now prepared to strike against what he believes to be the greatest threat to Louisiana: all of vampire-kind. His daughter, Willa (Amelia Rose Blaire; Royal Pains) is smart and ambitious, but as she works for her father she is subject to his imposing and demanding will.

Jurnee Smollett-Bell (Parenthood) plays Nicole Wright, the co-founder of the Vampire Unity Society, a non-violent group dedicated to supernatural rights. As a newcomer to Bon Temps and the granddaughter of Freedom Riders, she comes with the goal to bring equality to all supernaturals.

British heartthrob Robert Kazinsky (EastEnders, Pacific Rim), plays mysterious Halfling Ben Flynn intent on wooing Sookie. Niall Brigant, played by Rutger Hauer (Batman Begins, Sin City) is an ancient faerie and the king of his tribe. Also grandfather to Sookie and Jason, Niall is the sole survivor of a brutal attack by Warlow and has made it his mission to track down and destroy the legendary vampire.

Packed with special features for all Trubies to feast upon and including THAT scene with a naked Eric in the snow that became the shows most talked about scene ever, The Complete Sixth Season is a must have addictive addition to all Blu-ray and DVD collections.