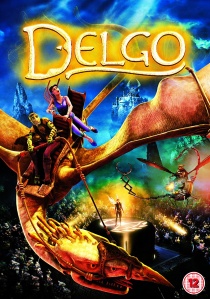 Visit the magical world of Jhamora, and meet Delgo; a young man at the centre of a dispute between two civilations that could plunge his world into darknesss.

Featuring an amazing voice cast including Freddie Prinze Jnr, Jennifer Love Hewitt, Val Kilmer, Anne Bancroft and Burt Reynolds, the award-winning Delgo has something for every member of the family! Delgo is released on DVD on 10th May 2011 by Twentieth Century Fox Home Entertainment.

Jhamora is home to two very different civilisations, the Norhin and the Lockni, who are on the verge of war. A group of Norhin have been manipulated by the evil Sedessa (Bancroft, Antz, Heartbreakers), and, believing they are superior to the Lockni, try to steal their land. Conflict breaks out and a Lockni couple is killed in the fray... leaving their son, Delgo (Prinze Jnr, Scooby Doo), an orphan.

Bitter and bent on revenge, no one is more surprised than Delgo when he meets Kyla (Love Hewitt, Garfield, Ghost Whisperer), a spirited young Norhin girl, and the two become friends. The friendship is given little time to blossom, however, when Kyla is kidnapped and Delgo blamed...

Can Delgo prove his innocence in time to rescue Kyla, end the war and unite Jhamora's people? Experience the action, adventure, tragedy and triump when Delgo is released on DVD this Spring!