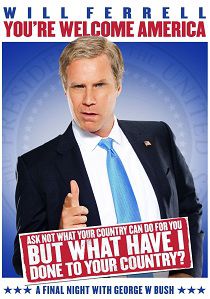 You're Welcome America: A Final Night with George W Bush (2009)

Superstar comedian and actor Will Ferrell stars in the hilarious HBO special You're Welcome America: A Final Night with George W Bush a live 90-minute performance of his Broadway show released on DVD from 26th April 2010 by HBO Home Entertainment.

With characteristic quality HBO has done it again with a politically incorrect and uproariously funny offering from Hollywood heavyweight Will Ferrell (Anchorman, Old School).

In the DVD, Ferrell reprises the role of one of his favourite political characters from Saturday Night Live, President George W Bush, assuming the guises of several 'Ws' throughout the years, including the 'cowboy' Bush, the 'flight suit' Bush and the (plain old) 'suit' Bush. Along the way, Ferrell-as-Bush provides an insight into Bush's childhood, his time at Yale, his stint as a major-league-baseball co-owner, his emergence as a political figure, and his chequered tenure in and (frequently) out of the White House.

Ferrell's Broadway show based on his award winning, critically acclaimed Saturday Night Live sketches, garnered $5 million in advance box-office, outsold its eight week run, and attracted A-list attendees. By referring to Obama as 'that Tiger Woods guy', opening the 'anals of history' and embarking on an extended, surrealistic riff about training a legion of monkey soldiers, Ferrell-as-Bush ensures that the live audience is kept laughing throughout, earning every single superlative quote from the critics: 'comic genius' (NY Times), 'comedy gold' (Nuts) and 'the kind of side-splitting, cathartic laughter that chases away the anger and the blues' (Vanity Fair).

Packed with exclusive bonus material and from director Marty Callner, who brought us Chris Rock: Kill the Messenger, no aspect of Bush's life or career is immune from Ferrell's outrageous brand of political satire. 'It is with great honour and dignification....' that HBO presents: Will Ferrell: You're Welcome America.

BD
A 13-year-old girl named Meilin turns into a giant red panda whenever she gets too excited in Disney and Pixar's 25th feature film Turning Red, released on DVD, Blu-ray and 4K UHD 2nd May 2022 from Walt Disney Home ... END_OF_DOCUMENT_TOKEN_TO_BE_REPLACED
Top PicksView