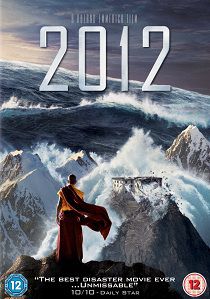 The end of the world is the beginning of a spectacular adventure, when global box office sensation ($711 million worldwide) 2012 arrives on Blu-ray and DVD on 29th March 2010, from Sony Pictures Home Entertainment. Visionary Director Roland Emmerich, creator of The Day After Tomorrow and Independence Day, outdoes himself with this jaw-dropping epic that's packed with breathtaking action sequences and groundbreaking special effects that must be seen to be believed!

Discover the truth behind the smash hit film with an array of Blu-ray and DVD bonus extras, including a feature length commentary with Writer/Director Roland Emmerich and Co-Writer Harald Kloser, an alternate ending, deleted scenes and the featurette "Roland Emmerich: Master of the Modern Epic," an intimate look at one of Hollywood's most revolutionary filmmakers.

Exclusive to the Blu-ray version of 2012 are additional groundbreaking bonus features "Roland's Vision: Picture-in-Picture", BD-LiveT enabled movieIQ, which allows viewers to immediately access updated trivia on the film's cast, crew, production and soundtrack - all while watching the movie! Also exclusive to the Blu-ray is the "Interactive Mayan Calendar" feature which allows you to enter the world of the Ancient Daykeepers in this interactive version of the Mayan Calendar. Simply enter a date, and your horoscope and personality profile will be revealed! Additional blu-ray bonus features on the Blu-ray include the production featurettes "Designing the End of the World," "Science Behind the Destruction,"and "The End of the World: The Actor's Perspective."

Never before has a date in history been so significant to so many cultures, so many religions, scientists, and governments.2012 is an epic adventure about a global cataclysm that brings an end to the world and tells of the heroic struggle of the survivors.

2012 was produced by Harald Kloser (10,000 B.C.), Mark Gordon (The Day After Tomorrow) and Larry Franco (Batman Begins) and executive produced by Roland Emmerich (10,000 B.C.), Ute Emmerich (The Day After Tomorrow) and Michael Wimer (10,000 B.C.). Its script was co-written by Harald Kloser and Roland Emmerich, who previously wrote 10,000 B.C.. The film's all-star cast includes John Cusack (Con Air), Amanda Peet (Something's Gotta Give), Woody Harrelson (Zombieland), Chiwetel Ejiofor (Inside Man), Oliver Platt (Frost/Nixon), Thandie Newton (Crash) and Danny Glover (Saw). It was released theatrically by Columbia Pictures and has a run time of approximately 158 minutes. It has been rated 15 for intense disaster sequences and some language