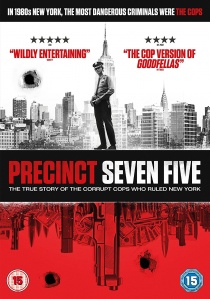 During the crack cocaine explosion of the 80s and 90s a New York City police officer brazenly led a crew of crooked cops to build his own crime empire in one of the toughest neighbourhoods in Brooklyn. Michael Dowd - dubbed "The Dirtiest Cop Ever" - turned the department's 75th Precinct into the dirtiest precinct ever, both protecting and robbing drug dealers and lining his own pockets until they were bursting with cash and drugs.

His arrest in 1992 led to the largest police corruption scandal in New York City history and this extraordinary story has now been told in the hard-hitting documentary Precinct Seven Five.

Packed with interviews with both those who broke the law and those who protected it, real crime scene photography and footage Precinct Seven Five gives audiences the ultimate insider's access, for the first time putting them inside the car - and the minds - of the crooked cops.

HotDVDBDDIGITAL
Batman: The Long Halloween, Part Two, released on DVD and Blu-ray 9th August 2021 from Warner Home Video, continues as the Holiday Killer is still at large and, with Bruce Wayne under the spell of the venomous Poison Ivy, Batman is nowhere to be found. END_OF_DOCUMENT_TOKEN_TO_BE_REPLACED
Top PicksView