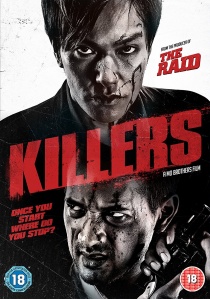 Killers, released on DVD and Blu-ray on 1st September 2014 courtesy of Lionsgate Home Entertainment, is a stylish thriller from The Raid producer/ Director Gareth Evans and directed by the hugely talented 'Mo Brothers' (Macabre). The film sees the explosive meeting of two serial Killers with contrasting, and sadistic, styles of murder.

Nomura is a good looking and stylish man in his early thirties who lives a successful life in Tokyo, Japan. Girls are drawn to him, something he uses to his advantage as none of them realise the sinister truth behind the clean-cut façade.

Nomura has been leaving a legacy of violent murders that he immortalises through video clips posted on a public video website. He thrives off of the fact that millions are witnessing his work through the virally spread videos.

Thousands of miles away from him, in a whole different world, lives Bayu, a disgraced investigative journalist living in a violent and unstable Jakarta, Indonesia. As Bayu's life is hit by the nadir of failures, Nomura's videos trigger his dark side as he starts to record his own brand of "justified" killings. Nomura's seemingly confident and controlled charm starts to peel when his ego is wounded by the fact that Bayu's videos have reached a significant numbers of followers that could rival his own.

Complicating matters further is Nomura's bizarre attraction towards a traumatised young florist Hisae. Bayu himself starts to sink deeper into a spiral of violence; obsessed with bringing down one of the country's biggest and most corrupt politicians, but during his bloody rampage he doesn't realise the repercussions towards his young daughter, Elly.

When the rivalry between Nomura and Bayu becomes an uncontrollable psychosis, the two of them must face each other in one of the most exhilarating film finales in years.

DVD
In Brian And Charles, released on DVD and Blu-ray 10th October 2022 from Mediumrare, an inventor lives alone in a remote village in the countryside, inventing useless things out of found objects in his garage. That is until ... END_OF_DOCUMENT_TOKEN_TO_BE_REPLACED
Top PicksView