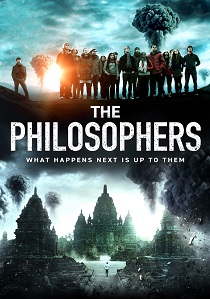 NewsScience FictionDramaFantasy
News Article Go back to homepage
Set for its re-release on UK digital in its directors' original form by (Yet) Another Distribution Company on 24th May 2021, in eerie dystopian reality The Philosophers, a group must decide who, out of them, stays alive and who must die
James D'Arcy, Bonnie Wright, Erin Moriarty, Freddie Stroma, Katie Findlay, George Blagden, Maia Mitchell, Philippa Coulthard
John Huddles
John Huddles, Cybill Lui Eppich, George Zakk
(Yet) Another Distribution Company
1 hour 46 minutes
24/05/2021
#ThePhilosophers
Thank you for supporting DVD365.net when you order using the link(s) below. As an Amazon Associate we earn from qualifying purchases
Buy DIGITAL
Information

Described by the L.A. Times as a 'provocative survival story' The Philosophers shines a light on how humans react when their lives are threatened by a catastrophic scenario and has never been more relevant. Lauded by audiences of all ages across the globe and even studied as part of Palo Alto College's Introduction to Philosophy course, the film is now set for its anticipated re-release on UK digital in its directors' original form, on 24th May 2021 from (Yet) Another Distribution Company.

At an international school in Jakarta, Indonesia, on the last day of class, 20 students from around the world are manipulated by their idiosyncratic philosophy teacher, Mr Zimit (D'Arcy), into conducting a final thought experiment before they can graduate. Using the tools of logic alone they must work out who among them is valuable enough to the future of humanity to merit a slot inside a specialised bunker - that only has room for 10 - during an atomic apocalypse, the rest must stay behind... doomed to be vapourised by the blasts.

Following a rapid trajectory of atomic detonations, psychological assaults and extreme philosophising, we're taken on an ever-changing-ride across multiple realities to fascinating and thrilling effect. Petra (Sophie Lowe - Blow The Man Down, Beautiful Kate) the brightest girl in class and her boyfriend, James (Rhys Wakefield - True Detective, The Purge), take centre stage as star-crossed lovers whose romance and fate plays out with a myriad of outcomes.

The Philosophers drills into both the beauty and the desperation of human behaviour, as it explores serious questions of emotion versus reason, power versus weakness and leaders versus followers and delivers a riveting, mind-expanding thriller.

DVD
Released on DVD 4th April 2022 from BBC Worldwide, Golden Globe, Emmy and BAFTA winner Ben Whishaw stars in This Is Going To Hurt, Adam Kay's adaptation of his best-selling memoir about life as a junior doctor. END_OF_DOCUMENT_TOKEN_TO_BE_REPLACED
Top PicksView