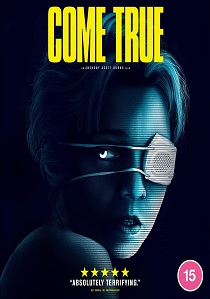 NewsScience FictionHorror
News Article Go back to homepage
A teenage runaway takes part in a sleep study that becomes a nightmarish descent into the depths of her mind and a frightening examination of the power of dreams as Come True is released on Blu-ray 5th April 2021 from Lightbulb Film Distribution.
Julia Sarah Stone, Landon Liboiron, Carlee Ryski, Christopher Heatherington, Tedra Rogers
Anthony Scott Burns
Steven Hoban, Mark Smith
Lightbulb Film Distribution
1 hour 45 minutes
05/04/2021
#ComeTrue
Thank you for supporting DVD365.net when you order using the link(s) below. As an Amazon Associate we earn from qualifying purchases
Buy BD
Information

Looking for an escape from her recurring nightmares, 18-year-old Sarah (Julia Sarah Stone) submits to a university sleep study, but soon realizes she's become the conduit to a frightening new discovery.

Dreams twist and nightmares come true in this mind-altering new work of science-fiction from Anthony Scott Burns (Our House) that haunts the space between wakefulness and sleep.

DVD
Tender and violent, terrifying and comic, The English, released on DVD 19th December 2022 from Dazzler Media., takes the arrows and bullets of its genre only to twist them into a uniquely compelling parable on gender, race, ... END_OF_DOCUMENT_TOKEN_TO_BE_REPLACED
Top PicksView