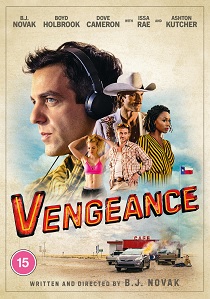 Mediumrare Entertainment announces the black comedy mystery thriller Vengeance is being released on DVD and Blu-ray on 16th January 2023.

Unsolvable deaths, deep state conspiracy theories, exploding electric cars - welcome to the weird and wild world of Vengeance, the terrific directorial debut from B.J.Novak (better known for his role as Ryan in The Office: An American Workplace). Novak has lined up a fantastic cast to star alongside him, including The Sandman's Boyd Holbrook, Ashton Kutcher (Jobs) in a scene-stealing part as a cowboy record producer, singing sensation Dove Cameron, and Issa Rae (Roar).

It seems like Novak might well have been taking notes from Tarantino while appearing in Inglourious Basterds: Vengeance is filled with hilarious dialogue - "As a personal boundary, I don't avenge deaths" - and quirky characters, and brings the murder mystery genre bang up to date in a fresh and wildly entertaining style.

A fish-out-of-water comedy thriller with a gripping puzzle of a plot at its heart, fans of Knives Out and Reason to Leave will be sure to enjoy Novak's sharp-edged debut.

Ben Manalowitz, a journalist and podcaster from New York City attempts to solve the murder of a girl he hooked up with and travels down south to investigate the circumstances of her death and discover what happened to her.