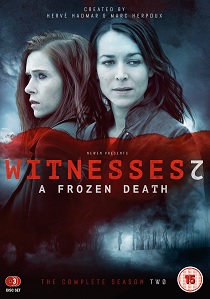 Witnesses: The Frozen Death begins with the discovery of 15 frozen bodies of men in the north of France. Lieutenant Sandra Winckler (Marie Dompnier, The Tunnel) uncovers that all 15 men are connected to Catherine Keemer (Audrey Fleurot, Spiral), who went missing three years ago.

The determined Sandra Winckler leaves no stone unturned to find Catherine Keemer. When Sandra finds Catherine, Catherine can't remember her past - except that she gave birth to a child, who has disappeared.

Believing that Catherine is innocent, Sandra needs to find out who else would have had a motive to kill the 15 men and what happened to Catharine's missing child.

Despite being a second season Witnesses: Frozen Death is a standalone series - telling a brand new, intriguing mystery.

HotUHD
After moving to a new town, two brothers discover that the area is a haven for vampires as the classic The Lost Boys is released on 4K UHD 20th September 2022 from Warner Home Video. END_OF_DOCUMENT_TOKEN_TO_BE_REPLACED
Top PicksView