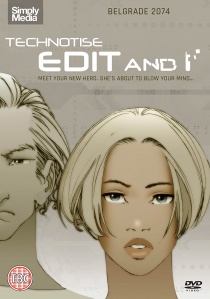 Filled with sex, drugs, fast cars and hover boards, Serbian cyberpunk anime hybrid Technotise: Edit & I has all the makings of a cult classic and now comes to UK DVD for the very first time courtesy of Simply Media. Directed and written by renowned comic book author and artist Aleksa Gajic (Scrouge of the Gods), this exhilarating sci-fi animation based on his graphic novel Technotise makes its UK DVD debut on 9th November 2015.

Edit keeps failing her exams. Her parents keep nagging her. Her boyfriend's a pothead. Her teacher is pervy. She is bored with life and no-one's giving her a break.

When her drug-dealing friend offers to implant a stolen military memory chip into her bloodstream to improve her brain power, she jumps at the chance. Little could she predict just how powerful the chip was.

The stolen technology begins to take over her mind and body. She develops a split personality and new powers greater than she ever imagined. But, the battle is now on to retrieve the stolen technology running through her veins - and Edit has to race against time to save her life...

Meet your new hero. She's about to blow your mind in Technotise: Edit & I.