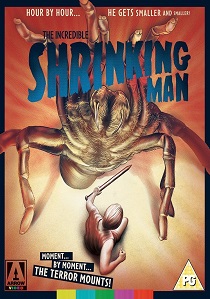 He baffles science! He confounds medicine! Submitted for your approval, the strange story of Scott Carey an ordinary young man who, through an extraordinary set of circumstances, becomes The Incredible Shrinking Man!

Whilst on a holiday cruise with his wife, young Scott finds himself enveloped by a luminous mist which cover him in a strange, glittery dust. Several months later, he s accidentally sprayed with an insecticide. Soon, Scott starts shrinking at an alarming rate, and before long he s thrust into a terrifying world of gigantic cats, spiders and other over-sized pitfalls!

Adapted for the screen by celebrated fantasy scribe Richard Matheson (I Am Legend) from his own novel, The Incredible Shrinking Man directed by sci-fi pioneer Jack Arnold (It Came from Outer Space, Creature from the Black Lagoon) is rightly regarded as being one of the finest science-fiction films of all time.

Released 13th November 2017 from Arrow Video, this beautiful UK Blu-ray debut features a documentary on Jack Arnold; new sleeve artwork and a collector's booklet; as well as, for old school enthusiasts, a Super 8 presentation of the film - the incredible shrinking reel, if you like.

BD
Tom Hardy returns as the lethal protector Venom, one of Marvel's greatest and most complex characters in Venom: Let There Be Carnage, available on 4K Ultra HD, Blu-ray and DVD on 3rd January 2022 from Sony Pictures Home ... END_OF_DOCUMENT_TOKEN_TO_BE_REPLACED
Top PicksView