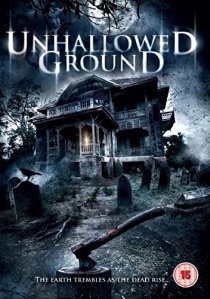 A spooky British horror which puts its own, unique twist on a classic premise, Unhallowed Ground is released on DVD by Kaleidoscope Home Entertainment on 13th July 2015.

As the lone moon rises over wild and uninhabited moors, a group of friends find themselves lost and desperate for shelter when they arrive at the door of an abandoned building, long rumoured to hide a secret vault full of treasured artefacts.

Hastening through the creaking doors, the friends begin their wait for the darkest hours of the night to pass, but quickly realise they are not alone.

When a gang of burglars suddenly arrive in search of the vault, unexplained noises, apparitions and disturbing whispers echo through the empty corridors. The house is stirring and as the ghostly noises take a deadly, malevolent turn, the teenagers realise that they must escape both the spirits and the burglars or become victims before the night is over...