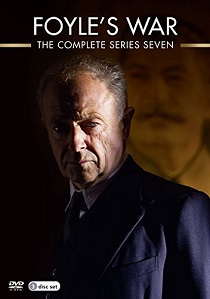 NewsTV SeriesDrama
News Article Go back to homepage
The war is over - but a new one is beginning, less explosive but no less deadly - a Cold War. Foyle's War is back, with Series 7 released on DVD on 13th May 2013 courtesy of Acorn Media.
Tim McMullan, Rupert Vansittart, Colin Connor, Jesse Fox, Ellie Haddington, Michael Kitchen
Andy Hay
Jill Green, Nicole Finnan, Susan Dunn, John Chapman
Acorn Media
4 hours 35 minutes
13/05/2013
#FoylesWar Series 7
Thank you for supporting DVD365.net when you order using the link(s) below. As an Amazon Associate we earn from qualifying purchases
Buy DVD
Information

Foyle's War is back! In the first series since 2010 Michael Kitchen returns as the enigmatic DCS Foyle in ITV's hugely popular and successful Foyle's War, but this time he has a new and exciting role working for Secret British Intelligence.

Honeysuckle Weeks stars alongside Kitchen in the Bafta Award winning show from acclaimed writer Anthony Horowitz (Midsomer Murders, Injustice), which returns to ITV on Sunday 24 March, then on DVD as Foyle's War - The Complete Series Seven on 13th May 2013 courtesy of Acorn Media, featuring over ninety minutes of behind the scenes features and cast and crew interviews.

The war is over - but a new one is beginning, less explosive but no less deadly - a Cold War. Foyle finds himself drawn into complex webs of security and counter security where the loyalties of even those closest to him are brought into question.

With the success of the previous series, Foyle's War continues to boast staggering audiences. On DVD, the show has achieved fantastic results with sales in excess of one million units, a testament to its watchability and incredible popularity.

UHD
When an alien spacecraft of enormous power is spotted approaching Earth, Admiral James T. Kirk resumes command of the USS Enterprise in order to intercept it, in the ... END_OF_DOCUMENT_TOKEN_TO_BE_REPLACED
Top PicksView