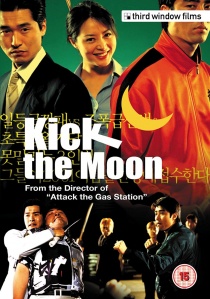 Based on the true story of the events leading up to and immediately following the 1979 assassination of South Korean President Park Chung-hee, the controversial satirical black comedy The President's Last Bang comes to DVD, released by Third Window Films on 23rd February 2009, uncensored and uncut for the first time in the UK.

Written and directed by award winning director, Sang-soo Im (a Good Lawyer's Wife), and starring Jae-ho Song (Musa The Warrior) and Yun-shik Baek (Save The Green Planet), the film focuses on the actions of Korean CIA Director Kim, an outwardly cynical man who secretly nurtures a personal disgust for both his nation and his president's embarrassing un-PC appetites for young female playmates, excessive drinking and Japanese pop music.

During yet another alcohol-fuelled banquet party at the heavily guarded KCIA safehouse involving the president, his top two (and equally corrupt) advisers, his favourite popular chanteuse and a young escort girl, Kim impulsively decides he's had enough. With the help of his loyal deputies, he improvises a conspiracy that will change the course of world politics overnight. Immediately hatching a plot to kill the president and then make the scene look like the result of an ambush by North Korean forces, Kim makes his move.

But as soon as the first shots are fired, the scene descends into chaos as the military and members of the KCIA begin to realise the gravity of the situation. Although skilfully directed in "serious" thriller style throughout by Sang-soo Im, comedy The President's Last Bang quickly develops a dark and politically satirical tone not dissimilar to that of Kubrick's masterful "Dr. Strangelove". The result is an amusing and compelling work that Premiere Magazine favourably described as "a nasty, profane and utterly bracing black comedy."

On its initial release, the film raised a storm of controversy mainly due to its fictional portrayal of the former South Korean President. This led to a suit being filed against the film by Park Chung-hee's only son, Park Ji-man. In 2005, a ruling by the Seoul Central Court ordered that 3 minutes and 50 seconds of documentary footage (mostly of demonstrations) be censored out of the film. During its theatrical run, both nationally and internationally, only the censored version was shown. The ruling was appealed, and in August 2006 overturned, with the court issuing the statement: "We must broadly confirm the right of free expression concerning the depiction of public historical figures."