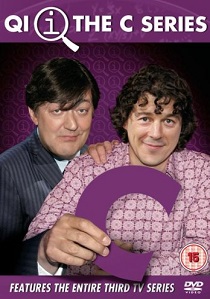 NewsComedy
News Article Go back to homepage
The BAFTA-nominated QI returns to reclaim its comedy crown as the cream of the quiz show crop, with the complete third series, The 'C' Series, arriving on DVD on 1st September 2008 from Warner Music Entertainment.
Warner Home Video
Unknown
01/09/2008
Thank you for supporting DVD365.net when you order using the link(s) below. As an Amazon Associate we earn from qualifying purchases
Buy DVD
Information

The BAFTA-nominated QI returns to reclaim its comedy crown as the cream of the quiz show crop, with the complete third series, The 'C' Series, arriving on DVD on 1st September 2008 from Warner Music Entertainment.

Host Stephen Fry (winner of the 'Golden Rose of Montreux' for best game-show host) oversees the likes of recurring guest Alan Davies, Jo Brand, Bill Bailey and Dara O'Briain in their quest to find the answers to (or in most cases not) questions on everything from crotchets to Christmas. The 'C' Series features all twelve 30-minute episodes and exclusive DVD extras including commentary from production crew (including creator John Lloyd, creator of Blackadder, Spitting Image and Not The Nine O'Clock News) cut scenes and outtakes.

Included as a DVD extra is a panel show first, the QI team has formed its very own pop band and created an exclusive song and video entitled 'Peter Cushing Lives in Whitstable'. This hilarious song features Alan Davies on lead vocals, Stephen Fry on drums, Phil Jupitus on guitar and Bill Bailey on keyboards. The C Series also sees some new additions to its original format - including two new rounds - 'Pin the tale on the catfish' and 'Spot the cuttlefish'.

Winner of a 2008 Royal Television Society Award, QI first aired to instant success on BBC2 in 2003 and has to date aired five complete series on BBC2. Working with a team of fiendish QI ninja researchers who leave no stone unturned in their mission to seek out the most obtuse and fascinating facts out there, Series Three promises to deliver the usual large amounts of hilarity and quick-witted bravado.

BD
Finding praise from critics around the world, Boyhood, following the life of Mason, from early childhood to his arrival at college, is released on Blu-ray and 4K UHD 27th March 2023 from Arrow Films. END_OF_DOCUMENT_TOKEN_TO_BE_REPLACED
Top PicksView