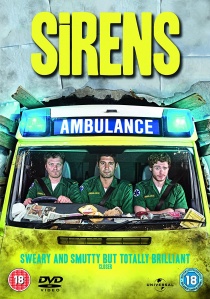 A team of three world-weary male paramedics are forced to confront the dregs of society - not to mention their own inadequacies as Sirens, Channel 4's hot new TV comedy drama; currently showing on E4 is released on DVD on 12th March 2012, from Universal Playback.

Swept along by an endless tide of bodily fluids (rarely their own), the trio of world-weary paramedics bicker, fight and shag their way through the darkly funny maelstrom of their lives. Behind the uniforms, the sirens and the fast driving, they are three ordinary blokes trying to make it through yet another shift. But once they've finished saving other people's lives, will they be able to salvage their own?

The complete first series box-set has a stretcher full of exclusive material including behind the scene footage, bloopers and exclusive scenes that delve deeper into this dark comedy.

The team deal with late night revelers, attend a major road traffic collision, find their male pride rattled by the lads from the local fire brigade, experience a student's drug induced paranoia, sex games gone wrong and are confronted with a life and death situation which hits closer to home than expected. To the outside world Stuart, Ashley and Rachid look like angels of mercy; to their colleagues, they're a trio of pedantic know-alls; and to the career alcoholics and late night revellers 2 on the swarming streets of Leeds, they're nothing more than glorified taxi drivers with one drop-off point - Accident & Emergency.

Inspired by the NHS and real-life tales from the front-line in health care, be shocked by the edgy and hilarious drama as Sirens comes to DVD on 12th March 2012.