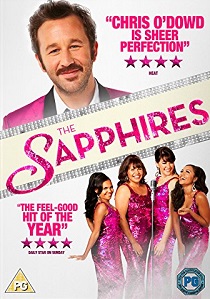 Chris O'Dowd (Bridesmaids, TV's Girls) stars in The Sapphires. Based on a true story this fun and feel-good comedy follows the dreams of four soul-sisters struggling to make it big. The Sapphires will be available to rent and own on DVD from the 4th March 2013, courtesy of Entertainment One.

Talented sisters Gail, Cynthia and Julie and their wayward cousin Kay, have killer voices and attitudes to match. Performing in a talent show contest they catch the attention of Dave Lovelace (O'Dowd), a down-on-his-luck Irish musician with a penchant for whisky and a passion for soul music.

It may not sound like a match made in heaven but Dave notices a sparkling talent in the girls and realises with a few changes they could be something special... they just need the right man to help them. Billing the band as the successors to 'The Supremes' Dave secures the girls their first real gig and flies them to Vietnam to sing for the troops.

As they embark on a hilarious journey of highs and lows, courage and commitment, friendship and family, they discover that all you need to succeed is a little heart... and a lot of soul.