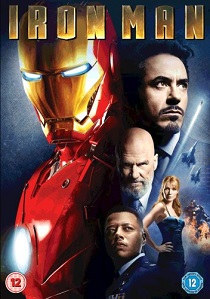 Kicking off the fourth quarter with spectacular Ultimate Edition two-disc sets on both DVD and Blu-ray, as well as in a single-disc DVD, Iron Man thrilled both critics and audiences around the world with its captivating story and stunning visual effects. Called "a true heavy metal hero" (The Sun), and "a movie to savour" (Daily Mirror), the film features an all-star cast including Academy Award® nominees Robert Downey Jr. (Zodiac, Chaplin), Jeff Bridges (The Contender) and Terrence Howard (Hustle & Flow) and Oscar® winner Gwyneth Paltrow (Shakespeare In Love) and was directed by Jon Favreau (Elf).

Earning over £17 million at the UK box office, Iron Man lifts off with high-speed, high-flying action when jet-setting industrialist Tony Stark survives an unexpected attack in enemy territory and escapes by building a high-tech robotic suit of armour. When he uncovers a nefarious plot with global implications, he dons his powerful armour and vows to protect the world as Iron Man. Straight from the pages of the legendary comic book, Iron Man is a hero who is built - not born - to be unlike any other!

The Iron Man Ultimate Edition two-disc sets are super-charged with hours of explosive bonus features that take viewers inside the suit of self-made Super Hero Tony Stark and his invincible alter ego. The sets offer the ultimate Iron Man experience with extensive explorations of the origins of the character in a six-part featurette, as well as a seven-part in-depth look at the making of the film, a revealing documentary on the stellar visual effects, Robert Downey Jr.'s original screen test, deleted and extended scenes, a photo gallery of concept art and behind-the-scenes images on the set and more.

The Iron Man single-disc DVD bonus features include the deleted and extended scenes. As one of the most anticipated releases of the year, the Iron Man Blu-ray presentation offers even more exclusive content for an incredible entertainment experience including a "Hall of Armour" that allows fans to enter the Stark database to zoom in on any of the three Iron Man suits – or Iron Monger. They can then activate the digital 3-D schematics to check out every weapon and the full high-definition renders let users fly around each suit to explore each of the armors in comprehensive detail. The "Iron Man IQ" is a user-friendly web application that lets users create and share new multiple choice quizzes based on clips from the film. Fans can also download other users' challenges via BD-Live.

In addition to Iron Man and more than three decades after they won the Academy Award® for Best Picture, director Francis Ford Coppola's classic films The Godfather and The Godfather, Part II will once again be enjoyed by audiences as they originally were meant to be seen, thanks to a meticulous restoration by Paramount Pictures, overseen by Coppola himself.

On October 27, 2008, both fully restored films will debut on Blu-ray, along with a newly re-mastered version of The Godfather Part III, to be included as part of The Godfather, The Coppola Restoration Collection. All three films will be available in a four-disc Blu-ray collection, loaded with a host of all-new special features.