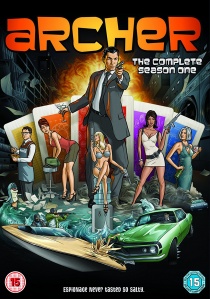 NewsTV SeriesComedy
News Article Go back to homepage
Introducing the world's most dysfunctional spy service; Archer: Season 1 explodes onto DVD from Twentieth Century Fox Home Entertainment on 2nd May 2011. Rude, crude and packed with satirical twists and turns, this edgy comedy focuses on sexual relations with a splash of espionage on the side!
Jessica Walter, Matt Thompson, Patrick Kevin Clark, H. Jon Benjamin
Steven Smith
Twentieth Century Fox Home Entertainment
Unknown
02/05/2011
Thank you for supporting DVD365.net when you order using the link(s) below. As an Amazon Associate we earn from qualifying purchases
Buy DVD
Information

Introducing the world's most dysfunctional spy service; Archer: Season 1 explodes onto DVD from Twentieth Century Fox Home Entertainment on 2nd May 2011. Rude, crude and packed with satirical twists and turns, this edgy comedy focuses on sexual relations with a splash of espionage on the side!

Archer is an animated comedy set at the International Secret Intelligence Service (ISIS), a spy agency where global crises are merely opportunities for its highly trained employees to confuse, undermine, betray and manipulate each other. Sterling Archer, deemed the 'world's most deadly secret agent', does his job purely for the accompanying jetset lifestyle of women, parties and fast cars!

Having received an Emmy Award® nomination in 2010 and rave reviews across the board, Archer is fast becoming one of the most popular shows on both sides of the pond. The series is a melting pot of different styles and social issues, featuring 1960s fashion, 1980s technology and a political status quo where the Soviet Union still exists.

Described as 'James Bond meets Arrested Development' with a 'Mad Men' twist, Archer: Season 1 is not to be missed. Join in the action and enjoy a volatile world of international espionage mixed with an incestuous slice of office politics when it is released on DVD this summer!