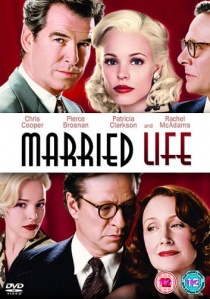 Starring Pierce Brosnan, Chris Cooper and Rachel McAdams, Married Life is a dramatic comedy set in the 1940s about the irresistible power and utter madness of love. Married Life is a beautifully shot, stylish and high quality drama, headed by a bevy of critically acclaimed actors, that will transport you back to the 40's  and into a troubled marriage. The DVD is packed with some compelling special features including audio commentary from the director and three alternate endings. Married Life is released to buy on DVD on 26th January 2009 from MGM and Twentieth Century Fox Home Entertainment.

Harry Allen (Chris Cooper - Capote, The Kingdom), a successful man in his fifties, decides he must kill his wife Pat (Patricia Clarkson  Good Night and Good Luck, Far From Heaven) because he loves her too much to put her through the humiliation of a divorce. He has fallen in love with a much younger woman called Kay (Rachel McAdams -The Family Stone, The Notebook) and shares his secret affair with his best friend Richard Langley (Pierce Brosnan - Mamma Mia, James Bond). He asks Richard to visit Kay so he can keep her company as his job is very demanding on his time. However, Richard falls in love at first sight with Kay and finds himself willing to do anything to win her over.

As Harry implements his awkward plans to murder his wife, the other characters are occupied with their own deceptions and passions, making this the perfect film noir domestic drama in every way - from the chrome and hardwood, to the faintly cigarette-stained cinematography. Don't miss the opportunity to get your hands on this immensely moving drama when it's released to DVD on 26th January 2009 from MGM and Twentieth Century Fox Home Entertainment.

BD
Adapted from the classic novel by Charles Dickens, The Personal History Of David Copperfield, released on DVD and Blu-ray 15th June 2020 from Lionsgate Home Entertainment, brings to life one of the ... END_OF_DOCUMENT_TOKEN_TO_BE_REPLACED
Hot PicksView