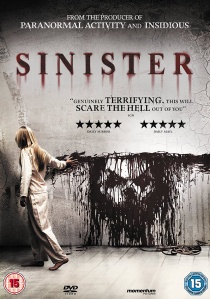 From the producer of Insidious and Paranormal Activity, comes Sinister, the horror box office smash that terrified cinemagoers and critics alike in 2012 released on DVD and Blu-ray from Momentum Pictures on 11th February 2013.

Desperately in need of a best seller to revive his struggling career, true crime writer Ellison (Ethan Hawke), moves his family to the scene of his most recent story; the unsolved, gruesome murder of a loving, happy suburban family.

Shunned by the local community and strained by his obligations to his family, the discovery of a batch of home movies in the attic offers Ellison shocking proof to the crime he is investigating. Ellison notices the same unidentified figure appearing in each of the 8mm films, leaving him convinced that all the incidents are linked by a truly bizarre connection. As his investigations uncover the terrifying truth he starts to lose his grip on reality and it soon becomes clear that he is placing his own family in harm's way.

Related Articles
24 Hours to Live, Valerian and the City of A Thousand Planets, In a Valley of Violence, The Magnificent Seven, Maggie's Plan, Waking Life, Anarchy: Ride or Die, Good Kill, Predestination, Boyhood, Before Midnight, What Doesn't Kill You, The Woman In The Fifth, Booklyn's Finest, Before the Devil Knows You're Dead, Gattaca, Lord of War, Training Day, Juliet, Naked, The Kid, The Truth, Cut Throat City, Gattaca
A Dog's Purpose, The Knick: Season 1, Perry Mason: Season 1
Broken City, Broken, In a Valley of Violence, Mr Right, Tangerine, Sinister 2, The Son Of No One, Freakonomics, IT Chapter Two
Doctor Strange, Deliver Us From Evil, The Day the Earth Stood Still, Doctor Strange
Racing Stripes, In The Line Of Fire
Comments
UHD Releases News Pick