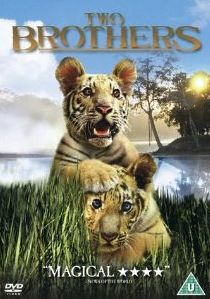 Deep in the heart of the Southeast Asian jungle in the early twentieth century, two tiger cubs named Kumal and Sangha are born amidst the ruins of a long forgotten temple. The pair grow up surrounded by ancient statues and under the protective gaze of their parents. Playing gleefully, they are without a care in the world. However, their serene dwelling is thrown into chaos by the arrival of hunter and adventurer Aidan McRory who has come to steal the Buddhist statues and return them home to sell to the highest bidder, and bagging a tiger or two will help pay his way. So when a dog picks up the scent of a tiger it looks there could be trouble for the tiger family.

When the young cubs become separated during the raid they both end up in settings completely different to their temperaments. Kumal, the more timid of the tiger cubs, is raised in a circus and trained to be dangerous and aggressive whilst the initially bolder, and more courageous cub, Sangha, lives as the house pet of a young boy, Raoul, the son of the regional governor. Beaten into submission, Kumal's time in the circus is a miserable one and he is forced to go through the motions of his act. But Sangha's happier time with Raoul comes to an abrupt end when he attacks the family dog that has provoked him for so long. As a result, Sangha is given to the Prince's royal menagerie where he is trained to become more aggressive.

Many months later, to entertain the Prince and his new fiancée, a fight is held in the royal arena between the Prince's tiger and the star tiger from a nearby travelling circus. Now fully grown, the tigers are pitted against each other in a fight to the death. Although they are initially opponents, the tigers soon realise that they are brothers and refuse to fight. Naturally, the Prince and the crowd are far from pleased with the resulting playful display, so when an animal trainer enters the arena to encourage them to fight the pair make their escape and set off on a journey back to the jungle from where they were born. However, with Aidan McRory and other hunters hot on their tails, will the brothers make it back to the jungle?

The picture is bright and colourful with a wonderful level of detail and texture with the lush jungle landscapes looking particularly impressive. Still, things aren't always perfect and the picture can occasionally suffer from too much contrast resulting in issues with grain and outlining. This is certainly evident in some of the long sweeping shots of the open arid landscapes, whilst black levels can suffer during the darker interior scenes. Never the less, the transfer is excellent throughout and there are no issues with dust specks or other picture imperfections.

The 448Kpbs Dolby Digital 5.1 soundtrack is a joy to beyond and is the perfect reference material for your surround system, as well as being an important teaching aid for Hollywood's sound editors. With the majority of the film set in the dense jungles of Indo China, the everyday noises of the jungle completely envelope the soundstage with an almost unparalleled amount of activity in all of the sound channels. I don't think the surround channels had a moments silence throughout the film, whilst the front stereo channels also performed admirably with some excellent stereo steerage and direction.

The separation is awesome, and although some of the dialogue can be a little inaudible at times, this can be put down to the masses of activity in all of the sound channels. Still, the dialogue is fairly low key with most of the vocals produced by the tigers. The centre channel also offers some rock solid positioning whilst the LFE channel occasionally indicated its presence whenever the adult tigers roared. Even the periodical musical score is perfectly balanced across the entire soundstage with no channel ever over burdened. For a children's film, the sound is simply awesome and it left me totally gob smacked at just what director by Jean-Jacques Annaud had managed to produce.

The wonderfully animated and scored Dolby Digital 5.1 menu system gives a tempting indication of just what sound and picture surprises are in store for the viewer. Even the overly long menu introduction can be forgiven as the tiger family appears out of an abandoned temple before displaying the various menu options in front of a number of cut scenes from the film. Even the subsequent menus have a nice transition effect to them, courtesy of a tiger or two.

The main extra is the extremely interesting and absorbing Audio Commentary from French director Jean-Jacques Annaud who talks almost continuously from start to finish about how each scene was set up and filmed. One thing is for sure, he certainly knows his work and he loved the animals under his charge. But, as to be expected, tigers don't respond particularly well to the director's call of "action" or "cut", so Jean points out where there was "adlibbing" from the animals, especially the cubs, and where animatronics or the touch of the computer was used. It's also interesting to learn that the film used nearly 30 tigers in total and that rather than keeping the animals in cages, it was in fact the film crew that spent most of their time behind bars. Fascinating stuff indeed.

The thirty five minute Wild About Tigers documentary is interesting enough, but it's no Sir David Attenborough Wildlife on One documentary. With an introduction and voiceover from Guy Pearce it doesn't take long for the fascinating life the tiger to be met with the usual tale of habitat destruction, poaching and a species in danger. Will man never be happy until he's wiped every species of animal off the face of the planet? Still, if your kids can stomach a tiger hunting its prey, then this documentary is useful educational tool and a timely reminder that films don't reflect real life.

Whilst the other five short documentaries are interesting enough, the narration is provided by the extremely annoying Freddie Highmore, the young boy actor from the film, who's over confident and matter of fact manner takes away any real interest and value. I'm sure these behind-the-scenes features will be of no, or little, interest to children, so why the producers opted to use him is totally beyond me. Still, if you can manage to grit your teeth for long enough you'll pick up some interesting snippets of information about the various filming techniques.

The most captivating extra on the disc, and pretty much every disc I've ever seen, is the eighteen minutes of Baby Tiger Outtakes. Quite how they can call them outtakes is a different matter, but quite frankly, who cares, as you watch the tiger cubs chasing a coconut, playing in the water and generally having a great time playing with everything and anything around them. Naturally, these young little scamps aren't going to take any notice of instructions so the film crew just rolled whilst they were at play and used the best bits in the film. However, they are all best bits and it's a delightful addition that makes it worth the price of the disc simply for this extra. At the end of it, I was smiling and grinning so much my cheeks had started to hurt!

The Call of the Wild featurette is rather short and rather pointless as it's just made up of behind the scenes clips and various scenes from the film where the tigers are simply roaring. Still, it shows off the raw power of these fantastic animals. Things are rounded off nicely with the Theatrical Trailer. All in all, it's a actually a rather good set of extras for what is essentially a harmless children's film.

Two Brothers is an absolute delight to watch and is a film that the entire family can enjoy over and over again. Whilst the storyline is rather lame, it is the wonderful cinematography and the beautiful tigers which makes the entire film worthwhile. Animal lovers are going to be falling over themselves to watch this film whilst the young and playful tiger cubs are enough to melt even the hardest and coldest of hearts. Never mind the film, just watch the Baby Tiger Outtakes and you'll feel all warm and fuzzy. It's definitely one of those films where you can end up with something accidentally stuck in your eye which needs extracting with a man sized tissue or two.

If you like animals then Two Brothers is the film for you, plus if you have any children then you have an even greater excuse to go and make a purchase. Think of this film as being like those Disney specials of old, but ever so much better. Highly recommended.