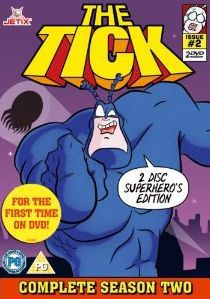 The Tick is a square jawed, muscular, bright blue crime-fighting superhero - with antennae sticking up from his head! His one mission in life - fighting crime in a place simply called 'The City', and he doesn't even suck blood. I'm not even sure why he's a tick. An absurd spoof of the classic superhero (and quite possibly copied by some more recent cartoons and CGI animated films), The Tick is high spirited, frequently obtuse, and prone to quipping odd, dim remarks alongside inspirational speeches. It all sounds like your classic superhero cartoon of the 1960's.

His superpowers include Nigh-invulnerability - which allows him to crash and bang without injury, Super strength - he can bend a steal girder with ease and Drama-power - where The Tick's powers increase as the situation becomes more dramatic. The Tick, like every superhero worth his salt, has a trusty sidekick who goes by the name of Arthur. The brains behind the action, as well as acting as a conscience to The Tick's impulsive actions, Arthur is also a moth - well, OK, a bloke dressed in a special suit that looks like a moth. Together they keep the streets of The City safe from a rogue's gallery of malevolent villains of all shapes and sizes.

Season Two brings the return of those uber-villains El Seed and Brainchild plus a host of other weird and wacky villains including a planet devouring giant with aching feet plus some evil Swiss who are after Arthur's pants! Our heroes also make their reality TV debuts whilst The Tick whittles himself a new sidekick out of wood when a woman comes between him and his old chum Arthur.

Low budgets and children's entertainment usually end up with the same result - poor quality images and some dodgy animation. Whilst this could be said about the first season, the second season is much improved. However, it's hard to say whether this was down to a higher budget for the second season or better quality source material for the DVD. Originally broadcast on television, this fullscreen presentation was never going to be anything special but the improved picture transfer has paid dividends. As with the majority of cartoons, the colours are rich and vibrant with as much detail as a 2D image will offer, and whilst the opening credits repeatedly suffer from the same grainy images problems, the quality of the actual episodes are much improved with far less edge enhancement issues.

Like the picture transfer, the Dolby Digital 2.0 stereo 192 Kbps soundtrack is nothing special. Given that it's all dialogue, with the occasional strange sound effect and dramatic score, the two-channel soundtrack isn't really tested too much and your surround system can probably be put aside for this one. Never the less, there's been a bit more money spent, and it does sound ever so slightly better than the first season, with some clear and audible dialogue - even if there's very little use of the stereo channels. Still, it's not as if we're dealing with a mega budget Hollywood blockbuster so I guess I'm being a little picky for nothing.

After the long winded introduction, with a trailer for other Jetix products than can be seen on Saturday morning television, we're presented with the impressively animated and scored menu system. Laid out like a comic book, and with transition effects between the menu, the episodes on each of the two discs can either be played in one go or individually. Extras wise, yet again, it looks like some evil plant based villain has made off with them all as there's nothing to be found here. There's not even any subtitles for the hard of hearing. Not much to talk about here then.

If you like your cartoons weird and wacky then you've certainly come to the right place with an animated series that is both imaginative and laugh out funny. Presented as a two disc release it certainly looks impressive, but those thoughtful fans who managed to convince the production companies involved release it on DVD may feel a little disappointed by the complete lack of extras - and not even yet another clever menu can make up for that.

Whilst bowing to popular demand is always commendable, the thought of continuing to make a quick buck on the back of it is not. Unfortunately, that same lack of commitment to the fans continues with this release of The Tick. Surely, the distributors and series creator Ben Edlund must have noticed that the first season was a success - and that fans were crying out for extras - so why continue with the bare minimum release? It really does take the shine off what is quickly coming a rather funny and entertaining view. Never the less, fans will still be delirious with the release of the second season - and hopes must be high the the third and final season will also find its way to the DVD. Let's just hope that a boxset is forthcoming - and with the extras it fully deserves.