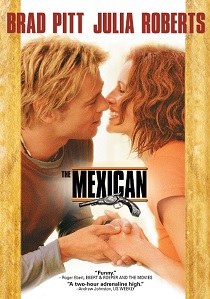 Jerry Welbach works for the local mob, but for the benefit of his tetchy girlfriend Samantha he wants out. However, his boss is unhappy with his previous jobs and should he back out of this one he'll take great pleasure in wrapping Jerry in a petrol soaked rug and introducing it to a lightened match. Jerry has no choice but to head to Mexico. However, his girlfriend is not happy as she'd planned for them to go to Las Vegas.

When Jerry arrives home he discovers that Samantha has already kindly packed his bags on the sidewalk and she's threatening to go without him. Wishing to stay alive Jerry has no choice to go to Mexico whilst Samantha goes off to Las Vegas. As usual for Jerry things don't quite go to plan. Although he manages to pick up the gun from his contact things quickly go down hill when his contact is killed and the car containing the gun is stolen.

Whilst Jerry heads off in pursuit of the gun, and ultimately suspecting that Jerry has kept the gun for himself, his bosses send a hit man to kidnap Samantha as an insurance policy and dispatch someone to Mexico to retrieve the gun and sort out Jerry once and for all.

The picture is bright and colourful with an above average bit-rate throughout the film. However, certain scenes, mainly those filmed in the bright outdoors, definitely suffered from picture imperfections and dust specs. For what is a recent, and high profile, film release it is a shame to see these problems showing themselves.

Although the soundtrack is provided in both Dolby Digital and DTS there is little to really challenge the two formats, although the flashback scenes with the piercing Mexican trumpet accompaniment certainly sounded impressive on the DTS soundtrack. The dialogue is crisp and clear in the centre channel and although the other channels are mainly used by the soundtrack, it is good enough for a film of this genre.

The menu is scored and simply animated with a cut scene from the film whilst the accompanying extras are reasonable enough to add value to the package. There's the usual collection of trailers and production notes and now the more and more common 'HBO making of'. The director's commentary is OK, if a little bland, and there's a number of deleted scenes with a director's commentary.

Although its not as funny as the producers were claiming, in fact I'd hardly call it a comedy, overall I actually quite liked it. The many plot twists were certainly unexpected and one was completely unexpected. It was especially amusing to see Julia Roberts character flying off the handle and her ruthless kidnapper 'coming out' and ending up being more of a relationship councillor than hit man.

It's hard to see how a film starring Brad Pitt and Julia Roberts failed to gather that much interest from the viewing public. It's certainly a film worth considering if your a fan of Brad and Julia, and if you don't fancy a purchase then you can't go wrong with a rental. You may be pleasantly surprised.