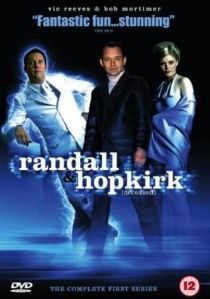 ReviewComedyCrimeFantasy
Review Article Go back to homepage
Randall and Hopkirk are a private detective agency with a difference. One of them is a ghost!
Vic Reeves, Bob Mortimer, Emilia Fox, Tom Baker
Comedy, Crime, Fantasy
2
6 Hours 17 Minutes
Buy DVD
Story

Randall and Hopkirk detective agency are hardly at the top of their game and Marty Hopkirk is totally fed up with jobs, when ever they get them, that just involve investigating a husband cheating on his wife or a wife cheating on her husband. Marty longs for some excitement such as a kidnapping or murder case. When yet another trailing case comes in from an overprotective, and damn right weird, artist, Marty wants nothing to do with as it will affect his plans for his wedding to his beloved Jeannie at the weekend. However, since it is not far from where the wedding is to be held, and money is money after all, he relents and they go to investigate.

Marty longed for an exciting case to investigate and he sure got one - investigating his own murder. Declining to move on to the "other side" he comes back down to earth in order to solve the case, but only his best friend Jeff Randall can see him. Even when Jeff does see him he thinks he's going around the bend and does his best to bring himself to his senses. When that fails there's nothing left for it but to give in an accept that his partner is dead and it's going to have some advantages when it comes to investigating cases. Be prepared for possessions, flying furniture, noxious fumes and general mayhem and bedlam that tends to follow Vic Reeves and Bob Mortimer in what ever they do.

The picture is bright and colourful and free of any artifacting or outlining. Although the series was created for television the special effects are good, although they are nothing too advanced or ground breaking. The moving walls of Professor Wyvern's "home" are clever, but it's amazing what you can do with a computer and a bit of blue screen these days.

However, the film distribution company has committed the ultimate DVD sin. Whilst the programme was broadcast in 16x9 widescreen in the UK, and most likely the rest of the world, it has been cropped to 4x3 on the disc, and its not a very good crop either. I can only assume they've done this on the pretext of assuming that consumers don't want to see television series on DVD in widescreen.

Although the series was primarily created for the BBC, there has been funding from the European union whilst its been distributed by Universal television. If this has been fully funded by the BBC then I'm guessing it would have been in widescreen from the off. A definite case of too many chiefs and not enough Indians.

The sound is reasonable enough with the David Arnold introductory theme tune being particularly good. Although the dialogue is clear enough in the front channels I did feel that it could sound a little muffled at times, although I suspect that this can be put down to Vic and Bob's accent which, at the best of times, can be a bit incomprehensible.

The menus on both discs are initially animated and scored with scenes from the series. However, once the introduction is over they become static and silent. Mind you, if you feel like watching the animations again then you can select an option from the bottom of the menu - and you might too as it is all simple but impressive stuff.

The extras are reasonable enough and add some fun and value to the disc. Although some people dislike outtakes I generally like them, although if it is just people laughing and sniggering they quickly become stupid. Although this is pretty much what we have he it is acceptable because Vic and Bob are such a good laugh, and their fans will certainly appreciate their humour on show here.

Overall it is a good series and fans of Vic and Bob will be more than happy with the results, although fans of the original series are going to slightly disappointed. There's plenty of appearances from various British comedy stars including Paul Whitehouse, Martin Clunes and Hugh Laurie and their presence really signifies what sort of comedy to expect from the series.

I would certainly like to see a second series but I'm not holding up any hopes. Although the series started out well on the BBC and pulled in a respectable audience it soon started to dwindle down to unacceptable levels. I just hope that the overseas sales are more productive and there is money in the pot for another outing.