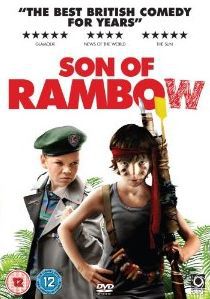 ReviewComedyDrama
Review Article Go back to homepage
Set on a long English summer in the early 80's, Son Of Rambow is a comedy about friendship, faith and that ever so weird business of growing up.
Neil Dudgeon, Bill Milner, Jessica Hynes, Rachel Mureatroyd, Will Poulter, Peter Robinson, Charlie Thrift, Jules Sitruk
Comedy, Drama
2
1 Hour 31 Minutes
Thank you for supporting DVD365.net when you order using the link(s) below.
Buy DVD
Story

Will Proudfoot is a shy and reserved young boy who is different from the other children at his school. Because his family is part of the Brethren, a religion that shuns the outside world, they do not allow him to have friends outside of the brethren, including his school, listen to the radio or even to watch television. The only thing Will has is his wonderful imagination and his book of drawings and stories. One day, whilst the children in his class watch an educational film, Will is forced to sit in the hallway. But Will is not alone as Lee Cater, a tough kid who is constantly thrown out of his classes for misbehaving, gets them both into trouble and a trip to see the headmistress - a person who, accordingly to Lee, is likely to torture them and break their backsides. However, Lee offers to take the blame if Will would help him. A shocked Will agrees - costing him his fathers watch in the process, but little does he know what he's just got himself into.

The next day, Will turns up at Lee's house who promptly forces Will to help him make a home made version of the Sylvester Stallone film First Blood which will be entered in competition. What Will doesn't know is that Lee has a part for him in the film - as his stuntman who is forced to endure some rather comic book style mishaps (don't try this at home folks!). After watching the original film (thanks to a pirate copy recorded at the local cinema by Will for his brother) and, having never seen any sort of film before, Will is instantly captivated by the film and starts to write his own sequel - casting himself as the son of Rambow and destined to save his father.

So when Will and Lee put their imaginations together, including using people and all sorts of other props (including a flying dog!) around them, they bond as only blood brothers can. As their grit and determination finally gets the project off the ground, it doesn't take long for the entire school to want to join in the production. However, the super-cool, and suitably bleached headed, French exchange student Didier Revol has decided he wants to be in the film. Up to now, everything was going well, but his presence has started to jeopardise their budding production and, even worse, Will and Lee's growing friendship.

Although this film can have no complaints in looking like a $4 million budget movie, the love and attention given to this DVD is simply wonderful. Given the state of some of the big budget products and their below par DVD (and Blu-Ray) releases Son of Rambow really shows people how it should be done. The colours are rich and vibrant with a wonderful level of detail and colour depth with solid black levels and no issues with pixelisation or outlining. Both the interior and exterior scenes are as good as each other and the superimposed animation from Joshua's imagination is the icing on the cake. Also, as is the case with most recent theatrical releases, the transfer is pristine with no dust scratches or other forms of print damage.

Whilst the picture transfer is virtually pixel perfect, the 448 Kbps Dolby Digital 5.1 soundtrack offers very little in the dynamic sound department. However, this film doesn't really need anything too fancy - although I expect that the budget didn't really allow for anything too special. All in all, it's a very low key affair but it still manages to offer some clear and precise dialogue in the centre channel and some good stereo steerage at the front.

Before you get to the main menu you are presented with a number of previews for Eagle vs. Shark, the Japanese animated Tales from Earthsea and Rocket Science. Once you get past these trailers you are greeted with a wonderfully "hand" animated and scored menu straight from Joshua's drawing book (look out for some of the stunts performed in the film in animated form!). Apart from the Special Features menu, the sub-menus are static and silent affairs. Never the less, they are still brilliantly designed and have some nice transition effects. If only the big budget releases could offer something as good as this.

The main extra on the disc is the feature length Audio Commentary with actors Neil Dudgeon, Bill Milner plus director Garth Jennings and producer Nick Goldsmith. From the off, we're told that we're not to expect anything highly intellectual and that Sylvester Stallone gave the film his blessing (which would have been a bit of a bummer if he hadn't). Everyone gets on well, with the adults (including two additional "guest" arrivals) and children providing two distinct levels of maturity to the stories about the production. If you ever needed an excuse to start listening to an audio commentary then this is the perfect place to start.

Next up, is the rather interesting twenty-six minute Making of featurette - which is made all the more so when you discover that the offices, cutting room and the special effects were all based on two boats on the canal near London. With plenty of behind the scenes footage, rehearsals, screen tests and interviews with actors Neil Dudgeon, Bill Milner, director Garth Jennings and producer Nick Goldsmith, it's a nice accompaniment to an already cracking audio commentary.

After the main interview there are two additional interviews. First off is the five minute Interview with Jessica Hynes which was filmed during the promotional tour. With prompted questions (which aren't chaptered) it's another interesting angle on the production. In a similar manner to the previous promotional interview, next up on the circuit is the eight minute Interview with Will and Bill. Whilst it's still interesting, it's not as flowing or a jolly as the main featurette. Next up is the U.S Competition Winner Footage. Running for fourteen minutes, it's a home movie with a James Bond twist. Naturally, being a home movie the camera work is all shaky whilst the picture quality is pretty poor. Still, all budding film directors and writers have to start somewhere and I'm sure the winners will be well chuffed with their film appearing on a mainstream DVD release.

Another home made film makes it onto the disc with the ten minute Aron: Part I by a budding filmmaker called Garth Jennings. In it, be prepared to be sent back into time to the 80s with some dodgy clothes and iconic images of the age. Next up is the three minute deleted scene entitled Geography Lesson although, as tends to be the usual for such things, there is no explanation as to why the scene was dropped. Things are rounded off nicely with the Theatrical Trailer.

The cover artwork barks that it's "the funniest British film since Hot Fuzz". Well, I think that's over stating the mark a bit as I laughed much more in Hot Fuzz than Son of Rambo - but I guess the target audience here may be a little more different this time around. However, standing back and taking a pragmatic approach to the film, it's definitely one you'll either going to love or hate and there's a definite requirement for the viewer to enjoy a genre such as this. Fortunately, I'm in the "love it" camp and I can relate to so many of the 80's references in the film (the 6th form common room scene had me with my head in my hands as I remembered the rather good New Wave music but also cringed at the absolutely awful hairstyles and clothes). Still, if you think you're in for some entertainment "Ashes to Ashes" style then you'd better look elsewhere for your kicks.

After so many spoof movies of late (and pretty dire ones at that), it could be ever so easy to become rather sceptical about Son of Rambow and the story it is trying to tell. Never the less, plenty of major distributors, such as the likes of Paramount in the USA and Optimum Releasing here in the UK, saw something special in the film and snapped up the rights at the Sundance festival - a good move when it took the best part of £1 million at the box office in just four days. What we have here is a fantastic little film that highlights the importance of friendship and most important of all, a wicked imagination. It's the perfect 80's flashback and feel good film with an excellent set of extras that truly bolsters the value of the package.