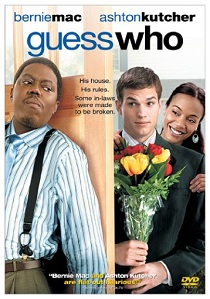 Simon Green is about to travel to New Jersey with his long term girlfriend Theresa Jones to meet her parents for the first time. But there's also a number of other reasons for their trip as they are not only due to attend Theresa's parents 25th wedding anniversary party, but the pair are planning on announcing their engagement. However, the only problem is that Theresa is from a close African-American family and her father Percy is looking forward to meeting her boyfriend she talks so highly of. Trouble is, Theresa has neglected to tell them that her beloved Simon is white.

Percy is a bank loans officer who takes great pride in the knowledge he is always right, especially when it comes to his family's welfare. As far as he is concerned, no man will ever be good enough for his baby girl so he decides to run a credit check on Simon. Luckily for Simon, he appears to be the perfect match, well at least on paper. However, things rapidly turn into an embarrassing farce when upon meeting Simon for the first time he thinks he's the taxi driver and the driver the love of his daughters life. When Simon's identity is finally revealed, Percy's hopes of a Denzel Washington look-alike have been sorely dashed.

Although the permanently clumsy Simon tries his hardest to make a good impression, he is rebuffed by Percy at every turn and suggestion. Desperately trying to seek approval from Percy, Simon starts to fabricate an increasingly outlandish number of stories about his past, but he is also hiding a secret that not even Theresa knows. That secret is that he's just quit his lucrative job as a stockbroker, and that's just about the only thing Percy seems to like about him. It's going to be a tough weekend, but as they like to say around these parts, love conquers all...

The picture is bright and colourful with a high level of detail throughout. Both the interior and exterior scenes offer a large amount of detail with some rich colours and textures, whilst the black levels are reasonable enough and there are no signs of either artifacting or outlining. With the film being such a recent theatrical release the print is free from dust specks and other form of print damage. All in all, it's a good effort for what is essentially a rather low key film.

For this particular genre of the film, the 448 Kbps Dolby Digital 5.1 soundtrack is surprisingly good. With not much in the way of explosions or dramatic effects to handle, the soundstage is dominated by the dialogue and the musical score. The dialogue is crisp and clear in the centre channel whilst the surround channels are used occasionally by the musical score and the occasional ambient effect. LFE effects are none existent, but given the style of film they're not really essential, or missed for that matter.

Although static, the main menu is scored with the music from the film whilst the submenus are static and silent affairs. The menu is simply laid out and easy to navigate through. Extras wise, things are a little poor with a Gag Reel and some deleted scenes to keep you Bernie Mac and Ashton Kutcher fans happy. Unfortunately, for everyone else, there's very little to get too excited about.

There is a collection of seven Deleted Scenes, with an option audio commentary from director Kevin Rodney Sullivan, which can either be watched individually or in one go. Running for nine minutes, the scenes are not really of any interest and were generally cut for pacing purposes. The commentary is always a welcome addition to any collection of deleted scenes and Sullivan provides an informative and light hearted commentary. It's just a pity he couldn't have provided a commentary for the main film too.

Depending on who the actors are in the film the Gag Reel can either be a collection of rib tickling outtakes or something that is as welcome as a dose of food poisoning. Unfortunately, the four minutes worth of outtakes here are the former, which given the comedy potential of comedian Bernie Mac, is a bit of a let down. Rounding things off is a collection of trailers for other Twentieth Century Fox titles in their "seventy years of Fox" celebrations. All in all, the extras here are a big disappointment with nothing of real note standing out and adding any real value to the package. Things could have been so much more interesting if Sullivan, and even Kutcher, could have been persuaded to provide a commentary track.

Guess Who is trying to be another version of Meet the Parents, but at least in the formers case it's method of slapstick and uncomfortable situations actually managed to be funny. Whilst there's plenty of attempts at jokes, and I guess some people will appreciate them more than others, Guess Who does contain a simple message, and it's a message that becomes all the more obvious as the film progresses. That simple message is acceptance, acceptance of who people are and not simply an opinion based on their race or colour of the skin, and even more so if a loving couple is of not the same race.

I'm not sure whether a few of the scenes are more awkward for one race or another, but during a scene at the dinner table Simon ends up telling some racist black jokes. This left me feeling very uncomfortable and questioning whether it was something that director Kevin Rodney Sullivan felt was really necessary to include in the film. However, it is the fact that these jokes made me stop and think about the racial issues the film raises that the director did indeed manage to get his message across. Still, I just wonder what would have been said from today's race relation groups if those roles were reversed and it was Simon who was bringing home a black girl to the same awkward situations (OK, I know it's a remake of the 1967 film Guess Who's Coming To Dinner but opinions are, rightly I might add, a little bit different now)

If I had to rate Guess Who up until the final five minutes of the film then I'd have to class it as a bit of a stinker. But when a film which is so disappointing, and frankly rather boring, ends up making you smile and nod in agreement then you realise that the film has made its point. Whilst I'd hang fire on a purchase, you should at least consider it for rental and then take it from there.