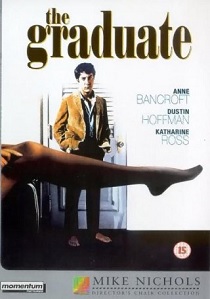 Benjamin Braddock has just graduated from college and, much to the displeasure of his parents, has returned home unsure of what he wants to do with his life. He spends his days laying around the house and sitting by the pool in a state of depression.

One evening at a party his fathers bosses wife, Mrs. Robinson, asks Benjamin to run her home. Happy to be the polite and obliging type he runs her home. Invited in to the house he is shocked to find that Mrs. Robinson is coming on to him and announcing that she is available. Panicking at the unwanted attention he is cornered by Mrs. Robinson who promptly removes her clothes and tells him to take up all opportunities.

The 'incident' is only interrupted when Mr. Robinson returns home and allows Benjamin to escape. However, he is intrigued by Mrs. Robinson and contacts her where they meet at a hotel. As he starts the affair he finds that more and more of his time is taken up by Mrs. Robinson and his parents become suspicious of his increasingly late nights.

After being pressured by his parents and Mr. Robinson he finally agrees to take out Elaine Robinson. Mrs. Robinson is far from pleased with this and becomes even more furious when she discovers that Benjamin is attracted to Elaine. Warning Benjamin off Elaine she threatens to ruin his life and plots to make Elaine untouchable by hastily arranging a marriage to another boy.

The picture is absolutely fantastic with a rich and bright picture throughout the film. It so clear and rich in detail that it is hard to believe that it is over twenty five years old. I failed to see one picture glitch or imperfection and either Momentum Pictures found a pristine print or they did a wonderful job of cleaning up the film.

Although the sound is only presented in Dolby Surround it is not the sort of film that really warrants the type of surround effects expected from today's films. However, the dialogue is crystal clear and easily audible throughout the film. Together with the superb soundtrack from Simon and Garfunkel that accompanied the film it really adds up to the perfect all round package.

The extras really make an already superb disc even better. Not only is there an interesting featurette on the film but an excellent interview with Dustin Hoffman who goes into detail about the film that truly kick started his Hollywood career. It's all rounded off by the now standard Trailer and a reasonably interesting booklet that seems to be in lieu of a director/cast commentary.

If you already own the originally released barren disc then it would be very hard not to recommend. The extras are worth the price of the disc alone. If you don't already own this film on DVD then this really should be added to your collection. A must buy!