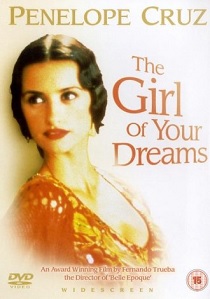 The year is 1938 and Spain is in the midst of a Civil War and the rule of General Franco. Nazi German was already close to Franco so it seemed natural that there were to be much collaboration between the two countries. Once such collaboration was in their respective film industries and a group of Nazi sympathising film makers have been invited to Berlin in order to shoot the Andalucian music drama "A Girl of Your Dreams" in both German and Spanish.

The group are naturally excited about this golden opportunity and quickly jump at the chance to leave war torn Spain and sample the delights of German hospitality. However, their excitement is soon extinguished when they witness the persecution of the Jews and other none German desirables. This problem is brought closer to home when the crew cannot find any Andalucian-looking German extras, forcing them to use Gypsies from a nearby concentration camp. Naturally, these unwilling extras are extremely suspicious of their intentions whilst the Spanish filmmakers witness the German guard's brutality for themselves.

There is also another problem for the filmmakers, and one of the actresses in particular. The womanising propaganda minister Joseph Goebbels has taken a shine to the beautiful actress Marcarena Granada and he's doing his level best to woo her, even under the eyes of his wife. It's quickly becoming obvious that Goebbels has invited the filmmakers to Spain for a completely different reason.

The picture is bright and colourful with plenty of details and rich colours, especially with the many traditional Spanish costumes. The fact that the film is also set in the latest 30's ensures that some of the colour has been washed out to give it that "authentic" look. There are a few picture imperfections such as dust scratches and the occasional whisker, but there are no signs of any artifacting or outlining whilst the bit-rate remains above average throughout.

The only minor complaint would have to be the aspect ratio of the film. Although it is presented in anamorphic 2:35:1 the overly large subtitles are plastered on the bottom black bars resulting in a rather strange picture, even if the aspect ratio is still displayed correctly. It would have been much better using the DVD subtitling facility with the subtitles then superimposed over the image. However, I suspect that the best print available for the DVD already contained the subtitles.

The sound is presented in a rather dull stereo soundtrack and this becomes all the more evident during the reading and digestion of the subtitles. Whilst Spanish speakers will have no problems what so ever, I found that the ambient effects became totally lost and jumbled in a sea of incoherent dialogue. Boy, do those Spanish people speak fast!

The menu is scored and animated with scenes from the film scrolling across the menu in the background whilst an image of Penelope Cruz scrolls across at the front. It's not the most imaginative of menus but, credit where credit is due, at least Arrow Films have made the effort. I don't class scene access as an extra, so this disc is devoid of any extras - a little disappointing perhaps, but I suspect that any material which was available would have only been in Spanish.

The highlight of the film must be the beautiful, and surely the girl of many a mans dreams, Penelope Cruz. The cynics amongst you may consider her staring role in the feature the main reason why this has been released, but I would have to say that the film is surprisingly good and deserves its presence on DVD. Even for its serious subject matter this film still manages to be extremely funny at times. Also, if it wasn't for the fact that Arrow Films supplied the film for this review I wouldn't have been any the wiser over its existence. Don't worry though, my impartiality remains firmly intact.

Put together with the superb Rififi, this film has certainly opened my eyes to the exciting genre known as "foreign" films. I'm sure that true film fans will have already discovered this and I just hope that I can now just about consider myself one of these too. After all, there are other filmmakers outside the of influence of Hollywood!