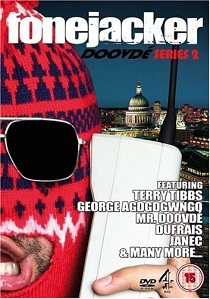 ReviewTV SeriesComedy
Review Article Go back to homepage
FoneJack / v. 1. to seize control of a telephone conversion by farce especially to divert it from reason and logic.
Kayvan Novak
Comedy, Television
2
2 Hour 18 Minutes
Thank you for supporting DVD365.net when you order using the link(s) below.
Buy DVD
Story

The Fonejacker shows he's still king of the prank phone call with more audacious attempts to scam and confuse the public in Fonejacker Doovde Series 2. Taking the art of the prank call to a new and long forgotten level, the Fonejacker is yet another cracking series for Channel Four that, along with the many other comedy series on the ground breaking channel, has a massive cult following. Spending his time winding up innocent folk with hoaxes which often border on the surreal and ridiculous, comedian Kayvan Novak provides some amazing voices that truly bambozle his unfortunate victims.

In order to fool the poor person on the end of the line The Fonejacker takes on many different aliases with some great impressions. These include Terry Tibbs, a dodgy used car salesman who's always trying to get a bargain, Mr Doovdé who rings directory enquires and talks in bewildering abbreviations often mistaking them for complete words like Hoomv (HMV), Doovd/Doovdé (DVD), Pisp/Poospé (PSP), MUP3 (MP3), LucDe TIV (LCD TV), and Ibrahaim Puck (IBM PC). Then there's George Agbgdgwngo the African scammer who'll try everything, even resorting to giving away tickets to meet Ant 'n' Dec, in order to obtain your bank account details.

The Mouse is a talented mouse who can do lots of things, including talking, and even manages to ring various lock smiths to help him escape from his cage whilst Mr Miggins is a confused and elderly gentleman who can't get to grips with the world of modern technology. Then there's Internet Relationship Providings who'll call any time of day or night with excellent offers of Internet relations - and it's free to sign, although there's the signing on fee, the monthly payments and the cash back you actually have to pay back. Finally, there's the Chinese DVD Gang who have got all the latest films, direct from the back row of the cinema. They're guaranteed no illegal downloads, not fake, just replication student project. You want buy DVD?

With no real picture as such, the Monty Python style animations and occasional "live action" scene with a range of concealed cameras isn't going to win any awards for their camera work or use of filming equipment. Still, we're more interested in the comedy element and, all in all, the quality of the images is good enough with a wide range of colours on show. Sure, the quality of some of these scenes are deliberately poor, but for Fonejacker it is something that helps to enhance the shows appeal.

As with most television releases on DVD, and due to the continual bandwidth limitations of terrestrial analogue and digital television broadcasts, there is very little to be expected from the sound department. Still, the 256Kbps Dolby Digital 2.0 soundtrack is more than sufficient for its needs and the all important telephone dialogue is kept crisp and clear throughout each episode.

The menu is pleasantly animated and scored whilst, rather unusually for a DVD these days, the submenus at all animated and scored with some amusing sketches created for the DVD. The episodes can be played in one go or individually selected, although if you decide to dive in and watch all of the episodes then you may miss an important option on the episode selection menu - the Episode Commentary on the first two episodes. Extras wise, the DVD

features a whole host of superb, and unseen extras, such as the Fonejacker Christmas Special, Unseen Footage, Behind the Scenes documentaries plus The Fonejacker Doovdé signing at Virgin Piccadilly. And let's not forget that there's an excellent comedy series to boot too!

Following on from the various behind-the-scenes featurettes is the four minute Interview with Kayvan. Whilst some might think it's rather short it still manages to be extremely interesting. If you ever wanted to know how he works, how the calls are recorded and where he gets his ideas from, then all will be revealed. Next up is a short

The Fonejacker Doovdé signing featurette where fans gathered at Virgin Piccadilly to get their freshly purchased DVD signed by the great man himself (even if he's safely hidden behind his trademark balaclava). One of the gems in the extras is the Unseen Material section with a number of Deleted Scenes. The initially confusing menu contains four additional scenes - Jimmy Juice, Shat on the Floor, Bijan Pizza Delivery and Burr. These scenes are just as funny as the others, so I can only assume there wasn't enough time for them to be included in the show.

Whilst the various episodes are funny, the two Audio Commentaries are not as Kayvan simply ends up as one character or another and, very occasionally, manages to provide a bit of information about the series or the current sketch. Needless to say, I soon good bored of this and turn the commentary off. Finally, laid out over two sub menus with some classic quotes to help you make your selection, your favourite character sketches from the series can be viewed in one go with the Character Selection facility. All in all, it's a great collection of extras that adds massive value to an already highly tempting disc.

Originally shown as part of the 2006 Comedy Lab Season and following it up with an alternative Christmas message on E4, Fonejacker has been described as having "the rare alchemy of a brilliantly versatile character comedian at heart, a staggering amount of superb concepts and stylish execution to make it a brash and daring brand new comedy." Quite an accolade indeed, but then again, Fonejacker comes from a television company that is constantly at the forefront of comedy with home grown smash hits such as Father Ted and Peep Show tucked away in their locker. Channel Four, the owners of E4, also have the knack of picking the best imports too - remember the likes of Friends and Frasier? With a reputation such as this, Channel Four could certainly class themselves as the home of comedy.

The number of different voices that Kayvan Novak can come up with is simply astounding, and the beauty of it all is that each of his characters is so different to the last. This results in some great comedy sketches that, along with the Monty Python style animations, will have you falling about the floor in fits of laughter. Not only are the sketches funny, but you can almost relate to them - especially those annoying automated booking services that seem to have a mind of their own.

So, if you can cringe at the poor unfortunate victim and laugh at the same time then you're going to love this series. It's definitely a must have DVD for your comedy collection and with all those extras it makes it a fans paradise. Highly recommended.