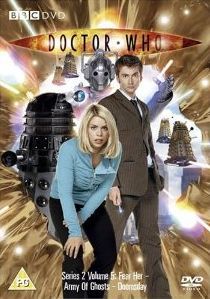 The Doctor and Rose's thrilling adventures together conclude with the release of Volume 5 of the second series on DVD. Starring David Tennant as the tenth Doctor and Billie Piper as his companion Rose, Volume 5 features some old enemies along with some old friends too. The final three episodes in series two are Fear Her, Army of Ghosts and Doomsday, of which the episode details are below.

The picture is wonderfully bright and colourful with an extremely high level of detail. Flesh and colour tones are excellent whilst black levels are extremely impressive - after all, this is a BBC television series and a forward thinking service that is considering a high definition future. Also, and unlike so many American television series that find their way onto region two DVD, given the fact that this is still a television production, and a recent one at that, there are no signs of print damage or other forms of picture imperfections. So, another cracking result from our license fee and Auntie Beeb.

Unlike the Doctor Who boxset which comes with a Dolby Digital 5.1 soundtrack, these individual volume releases are only presented as a 192 Kbps Dolby Digital 2.0 soundtrack - a soundtrack that is really only on par with the terrestrial television broadcasts on BBC1. As a result, it's nothing special - but only because I know what the 5.1 soundtrack is capable of. Never the less, as a stopgap at least, what's on offer here is good enough for this DVD with the pro-logic decoding on a surround sound processor providing a reasonable amount of activity in the surround channel as well as some clear and precise dialogue and stereo effects in the front and centre channels.

The menu is animated and scored with the wonderful theme music that is so famously associated with the series, whilst and animated TARDIS spins through time and space in a similar manner to the opening credits sequence. Although the Episode and Scene Selection menus are static affairs, you are greeted with the sound of the dematerialising TARDIS. Unfortunately, that's as far as the extras go with absolutely nothing available - that's all being saved for the series boxset release.

I've never liked these vanilla Doctor Who DVD releases and feel that it's a pretty shameful money making exercise by the BBC and their marketing department. After all, what's the point of these discs when a far superior series boxset is always made available just in time for Christmas? With series one already available in a fancy TARDIS style boxset, the second series in a Cybermen head promises to be just as good as the first - with a Dolby Digital 5.1 soundtrack and more extras than you could shake a sonic screwdriver at.

However, putting that shameless money making scheme aside for a moment, the disc does at least contain the two best episodes of the second series, and quite possibly the entire new series. The Army of Ghosts and Doomsday contain all the usual laughs, some old enemies with special effects that have never looked better, a tight and involving script plus some excellent acting from the principle cast members. I never thought that Christopher Eccleston was going to be upstaged by David Tennant, but I'm prepared to eat my words as he gets better and better as the series progresses. Sure, the Fear Her episodes is probably the weakest of the second series (and quite possibly the first too), but the remaining episodes more than make up for it.

So if you can't wait for the series boxset, or just fancy the series finale, then volume five is the perfect purchase. Sure, it doesn't have any extras, and each episode closes with the extremely pointless 'next time...' clip, but it's still cracking stuff. Never the less, make sure you don't give the BBC the chance to rip you off more than already are by paying the full retail price - you've save a bundle by buying on-line.